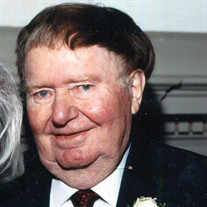 Willie Robert Bonner, 99, of Galloway, NJ, died peacefully at home on January 3, 2022. He was born February 28, 1922 and lived on a 1000 acre farmstead in Eudora, Arkansas until he joined the Army Air Corps before the start of World War II. As a Technical Sergeant, Willie was stationed in Atlantic City, NJ to train troops for overseas deployment during the war. There he met his future wife, Bette. Since then, he has remained in South Jersey. Willie, a resident of Mays Landing, NJ for most of his life, owned and operated a Buick dealership, “Bonner Buick”, from the mid-1950s through late 1960s. He was a prominent member of the community, serving a term as president of the Chamber of Commerce. He also belonged to a number of local organizations, such as the Mays Landing Masonic Unity Lodge, the American Legion and Mays Landing Sportsmen’s Club. He loved being in nature, fishing, and the Florida Keys. Always a gentleman, Willie was known for his wry southern witticisms, and made everyone who knew him smile. Willie is predeceased by his loving wife of 74 years, Bette, whom he affectionately called his “war bride”. He will be sadly missed by his two daughters, Leslie Warren and Cynthia Grzywinski; his five grandchildren, Elizabeth Warren, Amy Caton, Laura Hecht, Paul Fidalgo and Benjamin Fidalgo; and his five great grandchildren. His family is deeply grateful for the loving and devoted care administered for several years by his caregiver, Vicky. Thanks are also extended to his exceptional and caring hospice nurses, Beatrice and Sally and to their supporting hospice aides. A graveside service will be held on Sunday, January 9 at 1pm at Atlantic County Veterans Cemetery in Estell Manor, NJ. Arrangements have been entrusted to Wimberg Funeral Home in Galloway 609-641-0001. For condolences or directions, please visit wimbergfuneralhome.com. In lieu of flowers, please send donations to Grace Hospice at: www.gracehcs.com/donation-program/

Willie Robert Bonner, 99, of Galloway, NJ, died peacefully at home on January 3, 2022. He was born February 28, 1922 and lived on a 1000 acre farmstead in Eudora, Arkansas until he joined the Army Air Corps before the start of World War II.... View Obituary & Service Information

The family of Willie Robert Bonner created this Life Tributes page to make it easy to share your memories.

Send flowers to the Bonner family.