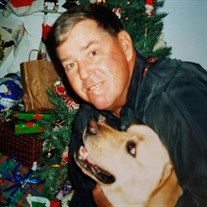 William (Bill) G. Saalman III, 73, of Dunnellon, FL passed away on November 15, 2016 at his home in Blue Cove as a result of extended illness, Bill was born and raised in Mullica Township, Egg Harbor City, NJ. Predeceased by his parents, William and Mary and brother, James. He is survived by his wife, Virginia; daughters, Lora Ofner (Thomas) and Kelly Glassburn (Patrick); sons, Glenn Charles and Scott Barnett; brothers, John and Robert Saalman (Jean); sister-in-law, Kathy Saalman; and the two loves of his life grandsons, Tyler (14) and Luke (11) Glassburn. Bill graduated from University of Syracuse with a BS in Forestry Management and then a Masters in Land Management from Michigan State University. He spent 35 years as a U.S. Department of Agriculture employee with the Natural Resource Conservation Service (formerly SCS). Aside from his family, his greatest love was fishing in the Florida Everglades, eventually starting his own guiding company “Fishing on the Edge.” His second love was gardening, often turning barren ground into an oasis of flowering shrubs, trees, and flowers. Bill was a true naturalist. He and his wife Virginia moved to Dunnellon from Naples, Florida three years ago and settled in Blue Cove. Bill discovered Dunnellon and its natural environment while Virginia was in Maryland attending a family funeral. When Virginia returned, she found a note from Bill that said “You take care of the negotiations and I'll take care of the heavy lifting.” From then it was just a matter of selling their home in Naples and finding the right home in Dunnellon. The family is extremely grateful for the compassionate care his doctors and nurses provided at Shands UF Hospital in Gainesville, Hospice care, and the many good wishes and prayers for Bill. Virginia asks that in lieu of flowers any contributions be made to Hospice or to a favorite charity. A celebration of Bill's life will be held on Saturday, November 19 at 10 o'clock a.m. at Robert's Funeral Home. 19939 E. Pennsylvania Avenue, Dunnellon. After the celebration the family welcomes friends to the Saalman home in Blue Cove – 11540 Camp Drive, Dunnellon.

William (Bill) G. Saalman III, 73, of Dunnellon, FL passed away on November 15, 2016 at his home in Blue Cove as a result of extended illness, Bill was born and raised in Mullica Township, Egg Harbor City, NJ. Predeceased by his parents, William... View Obituary & Service Information

The family of William G Saalman III created this Life Tributes page to make it easy to share your memories.

Send flowers to the Saalman family.