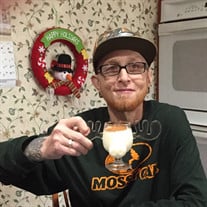 Moore III, William H. “Billy” – 45, passed away peacefully in his sleep on Monday, June 19, 2017. Billy was born May 19, 1972 to Theresa and William Moore Jr. (deceased). Billy graduated from Mainland Regional High School in 1992 and was a lifelong resident of Atlantic County, originally from Somers Point. Though Billy dealt with medical issues his entire life, he never let them affect his attitude or his desire to help others. He was a loving and caring person that was fiercely loyal to his friends and family as well as an inspiration to anyone that knew him. Billy is survived by his mother, Theresa Moore; his sister, Kelly Moore Hyer; his 2 nieces, Heather Parry (Robert Parry) and their daughter, Hailey Parry & son, Ryan Parry, and Jennifer Ortiz (Indalecsio Ortiz); and his nephew, Walt Hyer Jr.; along with his second family, Godmother, Nancy Previti; brother from another mother, Michael Previti - PALS(Maria Previti), his nephew, Michael Jr. aka MJ, his niece, Madison aka Madi Cakes; and his sister from another mother, Melissa Previti and his niece, Sophia. A celebration of Billy’s life will be held on Tuesday, June 27, 2017 at Wimberg Funeral Home, 400 Liverpool Ave, Egg Harbor City, 609-965-0357 at 10:00 – 11:30 am with a service starting at 11:30 am. For directions or condolences, please visit wimbergfuneralhome.com

The family of William H Moore III created this Life Tributes page to make it easy to share your memories.

Send flowers to the Moore family.