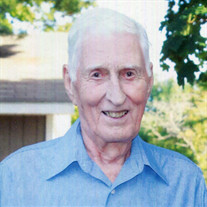 Hughes, William (Bill), 91, of Pomona, NJ passed away peacefully at home on Thursday, November 24, 2016. Born in 1925 in the Venice Park section of Atlantic City, where Bill attended both grammar school and high school. After graduating high school, Bill enlisted in the Sea Bees branch of the Navy and served two years on the island of Guam. After returning from the service, he met and married the love of his life Helen, his wife of 63 years. Bill had a 37 year career with Atlantic City Electric, where he was both a lineman and troubleman. Bill was a dedicated husband, father, and grandfather. He was an active member of the Assumption Church in Pomona. Bill loved camping with his family, working on his farm, and sharing a cold beer with friends. Bill was predeceased by his parents, Maurice Hughes and Marcella Hughes; his wife, Helen Hughes; his sisters, Lillian Michel and Beatrice McCaffrey. Bill is survived by his children, William (Billy) Hughes, John Hughes, Jim Hughes (Lynn), and Tom Hughes (Nally); his daughter, Mary Stoppard (Nick); his brothers, George Hughes (Janet), Edward Hughes (Carmen), and James Hughes (Joan); his grandchildren, Nicholas, Samantha, Bridget, Abigail, Adam, Katie, and Noah; as well as many nieces and nephews. The family wishes to thank all of those who have provided support and prayers over the last few years. A viewing will be held on Wednesday, November 30, 2016 from 6:00 - 9:00 PM at the Wimberg Funeral Home 211 E. Great Creek Rd., Galloway (609-641-0001). A Mass of Christian Burial will be held on Thursday, December 1, 2016 at 10:00 AM at Our Lady of Perpetual Help Parish-Church of the Assumption, 146 S. Pitney Rd. Galloway. Interment will follow at Laurel Memorial Park. For directions or condolences, please visit wimbergfuneralhome.com.

Hughes, William (Bill), 91, of Pomona, NJ passed away peacefully at home on Thursday, November 24, 2016. Born in 1925 in the Venice Park section of Atlantic City, where Bill attended both grammar school and high school. After graduating high... View Obituary & Service Information

The family of William Hughes created this Life Tributes page to make it easy to share your memories.

Send flowers to the Hughes family.