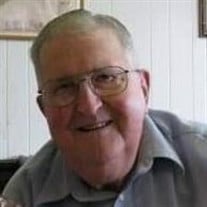 William (Bill) Anthony Butterhof, 86, passed away peacefully on Saturday, December 22, 2018 in his home in Mullica Twp, NJ. He was born February 3, 1932 in Mullica Twp, to Henry and Mary (Guenther) Butterhof, in the family home next to the family business. He attended St. Nicholas school and then graduated from Egg Harbor City HS in 1949. In his yearbook, he listed joining the US Naval Reserve (USNR) as his ambition, which he accomplished on September 6, 1949. He continued his service for 34 years in the USNR until June 30, 1983, when he retired as a Chief Petty Officer, Hull Technician (HTC). Starting in 1951, he worked at the family business, Butterhof's Feed and Farm which became Butterhof’s Farm & Home Supply in that same year. Upon his father's passing in January 1960, he and his brother Tom took over the business, with Bill becoming the sole owner in 1984. In January 1957, Bill became a NJ Forest Fire District Warden and was involved for 38 years until his retirement in 1995. He continued his life of service by being an active member of the Mullica Twp Republican Club. In addition, he served on the Mullica Town Council from 1965-1967, and was proudly appointed Mayor in 1966. He continued his involvement in Mullica Twp as a member of the Zoning Board 1971-1973, and 1986-2007. Bill's community involvement did not stop there. He joined the Knights of Columbus Council 3500 in 1971 and remained a member until his passing. Bill is survived by his wife of 65 years Alberta (Beppy), whom he married on June 27, 1953 at St. Nicholas Church; their children, Alberta (Beppy) Sweeney, William, Paul, George, Michael; sister, Louisa Mazetis; brother, Henry; along with numerous grandchildren, great grandchildren, nieces and nephews. There will be a visitation on Thursday, January 3rd from 12-2:00 PM then from 5-8 PM and again on Friday, January 4th from 9-10:30 AM all at Wimberg Funeral Home, 400 Liverpool Ave., Egg Harbor City 609-965-0357. A Mass of Christian Burial will be held at 11 AM at St. Nicholas Church on St. Louis Ave. Internment will immediately follow at the Egg Harbor City Cemetery. For condolences or directions, please visit wimbergfuneralhome.com. Memorial Donations in lieu of flowers can be sent to the Cure Alzheimer's Fund at: https://curealz.org/outreach/in-memory/william-bill-anthony-butterhof/ Or Fisher House Foundation best known for a network of comfort homes where military and veterans’ families can stay at no cost while a loved one is receiving treatment at: http://engage.fisherhouse.org/goto/WilliamAButterhof

William (Bill) Anthony Butterhof, 86, passed away peacefully on Saturday, December 22, 2018 in his home in Mullica Twp, NJ. He was born February 3, 1932 in Mullica Twp, to Henry and Mary (Guenther) Butterhof, in the family home next to the family... View Obituary & Service Information

The family of William A Butterhof created this Life Tributes page to make it easy to share your memories.