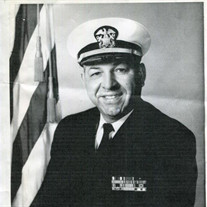 William Henry “Bill” Hanggeli, 92, of Germania passed away on Thursday, October 6, 2016 at home with his family by his side. Bill was born in Absecon Highlands on April 12, 1924 in a house on the corner of 6th Ave and Jimmie Leeds Rd. Along with his older brother, Archie and sister, Edith, he lived in that house for 14 years before moving north to Palisades Park in 1938. Bill lived in Palisades Park for 3 years before enlisting in the Navy on April 15, 1941, just shortly before Pearl Harbor. He started his 30 year naval career as a Parachute Rigger in Lakehurst, NJ. This followed with travels throughout the world including stints in Panama and the Asian Pacific. In addition to the many ships Bill served on, he did tours of duty during the Korean War with all four (4) battleships – The USS Iowa, Missouri, Wisconsin, and New Jersey. While he was stationed at the Philadelphia naval shipyard, he met this future wife, Trudy Anderson. They were married in December 1955. Bill became a commissioned officer in May of 1961. Along with three (3) young sons in tow, they moved to Naples, Italy where he served as a Flight Schedules Officer. After moving back to the states, he finished his career at Johnsville NAS in Warminster, PA. After retiring as a LCDR in May 1971 Bill and family moved back to South Jersey. He tried his hand at Real Estate and Assistant to the Sheriff’s Office. He found his second calling in 1973 working for Hoenes Bus Service coordinating and scheduling all bus routes for the company. Retiring in 1986, Bill and Trudy’s sense of adventure compelled them to travel throughout the US in their motorhome as active members of the WBCCI Airstreamers Club. Bill moved to Germania Gardens where his wife, Trudy passed on, spending the remainder of his life with family and friends. He was a member of the American Legion Post 430 and a 50 year member of the Masonic Lodge. Bill is survived by his sister, Edith Holroyd; his sons, Eric, Scott, and Todd; daughter-in-law, Karen; grandson, Todd, Jr; and several nieces. A gathering is scheduled for Saturday, October 22nd from 9:00 to 11:00 AM with a memorial service at 11:00 AM at Wimberg Funeral Home, 211 E. Great Creek Road, Galloway 609-641-0001. For directions or condolences, please visit wimbergfuneralhome.com. In lieu of flowers, donations may be made to the Reformation Lutheran Church, PO Box 467, Absecon, NJ 08201

The family of William "Bill" Henry Hanggeli created this Life Tributes page to make it easy to share your memories.

William Henry “Bill” Hanggeli, 92, of Germania passed away on...

Send flowers to the Hanggeli family.