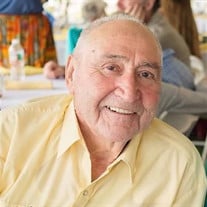 GRUNOW, WILLARD R., 92, of Pomona passed away on March 20, 2019 at home. He was born in Pomona and was an area resident all his life. He was a farmer and partner in Grunow Brothers farm, which won many awards at the New Jersey Farm Show for their white potatoes and sweet potatoes exhibits. With wife Loris they managed “The W & L Grunow Christmas Tree Farm” selling trees and grave blankets under the motto “Christmas Trees Grown with Love and Care”, bringing the entire family together in what became a beloved holiday tradition. He was a member of many local county and state organizations. These included: the Executive Committee of the Atlantic County Board of Agriculture, Director on the Atlantic County Market Growers Association, and member of the New Jersey Farm Bureau, New Jersey Christmas Tree Growers Association, Pomona Gunning Club and the Cologne Grange. He served three terms on the Atlantic County FHA committee and one term on the NJ State FHA committee, along with numerous years on the Galloway Twp Planning Board. Willard was an active member of the Pomona Vol. Fire Co. since April 1949 (70 years), and worshiped at the Egg Harbor Moravian Church. He was a veteran of World War II (Pacific Theater in the Philippines and Japan) and was awarded The Combat Infantry Badge, the Bronze Star and the Distinguished Service Medal of the State of New Jersey. Willard served as Director and President (5 years) for the national veteran organization of the 158th Regimental Combat Team. He was an active member of Galloway Twp. American Legion Post 430 and Galloway VFW Post 10620. Following WW II, he was a catcher for the Cologne Blue Sox, a baseball team in the Atlantic County league from 1947-1954. He was scouted by the Boston Braves and the Brooklyn Dodgers and achieved a minor league try out in Topeka, KS. He is survived by four children, Jeffery of Barefoot Bay, FL and wife, Jill Daly; Lynn Grunow Folk of Thurmont, Md., Sharon Grunow of Pomona and husband, Robert Barker, and Anne Grunow of Worthington, Ohio and husband, David Schmidt. There are seven grandchildren, Timothy and Andrew Folk, Lisa Folk Sweeney (and husband, Joseph), Brent Grunow (and wife, Kelli), Brad Ferguson (and wife, Lauren), Matthew and Isaac Schmidt; plus five great grandchildren, Joseph Sweeney, Nolan and Maggie Grunow and Maddie and Amelia Ferguson. Willard was predeceased by his wife, Loris (nee Kienzle); mother, Martha Sahl Grunow; father, Ernst Grunow; brother, Ernest Grunow; and sister, Viola. A Celebration of Life will be held on Sunday, March 31st from 2:00 – 4:00 PM with the service starting at 4:00PM all being held at Wimberg Funeral Home, 211 E. Great Creek Rd, Galloway 609-641-0001. In lieu of flowers donations, may be made to the Kienzle Music Fund in care of the Egg Harbor City Moravian Church, 235 Boston Avenue, Egg Harbor City, NJ 08215. For condolences or directions, please visit wimbergfuneralhome.com.

GRUNOW, WILLARD R., 92, of Pomona passed away on March 20, 2019 at home. He was born in Pomona and was an area resident all his life. He was a farmer and partner in Grunow Brothers farm, which won many awards at the New Jersey Farm Show for... View Obituary & Service Information

The family of Willard R Grunow created this Life Tributes page to make it easy to share your memories.