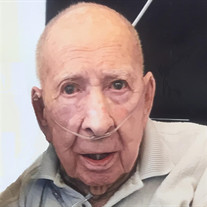 Walter F. Kuemmerle, 97, of Galloway, NJ, entered eternal life on June 27, 2017 from his home in Spring Village, where he resided for the past two years. Before moving to Spring Village, Walter lived on Asbury Road in Egg Harbor Township next door to his daughter, Nancy Tranovich, his son-in-law, Richard Tranovich, and his granddaughter, Angela Tranovich. He and his wife, Marie (nee Leeds) were devoted grandparents to Angela and supportive parents of Richard and Nancy. Marie's death on March 30, 2013 was a heartbreaking experience for Walter and the rest of his family. Throughout his life, Walter was a faithful and committed member of Epiphany Lutheran Church in Pleasantville, New Jersey. He was a driving force in its construction and a dynamo in personal and financial generosity to ensure its maintenance and mission. In 2006, Walter and his wife Marie celebrated their sixtieth wedding anniversary at the church in the presence of their adopted children, Michael and Nancy and their respective spouses, Deborah and Richard and their beloved granddaughter, Angela. After graduating from the Atlantic City Trade School and earning certification as a plumber, Walter enlisted in the Army just before the outbreak of World War II. Subsequently, he completed flight school and flew many missions throughout the war. His nickname was Ace. On two occasions he was shot down. Both times he escaped unharmed. The French Underground rescued him and returned him to American lines on one occasion. Another time, he was able to crash land successfully behind Allied lines. As a result of his service, Walter received a number of decorations and citations. Walter was a true Renaissance man. He was a skilled plumber and carpenter, a shrewd investor, and an avid stamp collector and train collector. During the course of his life, he operated two very successful businesses, a plumbing and heating business and a campground business (Pleasantville Campground). When he wasn't busy working, Walter and his wife, Marie enjoyed traveling and taking their granddaughter, Angela on short vacations. Walter deserves our congratulations for a life well lived and an assurance that God will welcome his faithful servant into his final home. A visitation will be held on Saturday, July 1st from 10:00 to 11:00 AM with the service starting at 11:00 AM at Epiphany Lutheran Church, 306 S. Franklin Blvd, Pleasantville, NJ. Interment will immediately follow at the Atlantic County Veterans’ Cemetery in Estell Manor. Arrangements have been entrusted to Wimberg Funeral Home, 211 E. Great Creek Rd, Galloway 609-641-0001. For directions or condolences, please visit wimbergfuneralhome.com.

Walter F. Kuemmerle, 97, of Galloway, NJ, entered eternal life on June 27, 2017 from his home in Spring Village, where he resided for the past two years. Before moving to Spring Village, Walter lived on Asbury Road in Egg Harbor Township next... View Obituary & Service Information

The family of Walter F Kuemmerle created this Life Tributes page to make it easy to share your memories.

Send flowers to the Kuemmerle family.