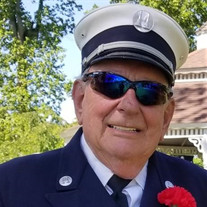 Walter Raymond Kienzle Jr. "Butch" 74 of Egg Harbor City departed this life and passed away peacefully on Friday, October 25, 2019 at AtlantiCare, Galloway. Butch was born in Egg Harbor City and was a devoted resident all of his life. He dedicated 53 years as an active/life member of the Egg Harbor City Volunteer Fire Dept., where he served as a Captain for twenty years as well as a Safety Officer. He also served his community as an Egg Harbor City Councilman for ten years. He was an honorary member of the Germania Gunning Club. Butch's dedication to his community followed through to his love of gardening and making sure his own home and yard looked picture perfect. So much so that his hard work earned him the "House Beautiful" award from The Press of AC. He was also known for his passion of model trains that ran throughout his Philadelphia Avenue home for so many in the community to enjoy. Butch was a Carpenter with the Carpenters Union for 36 years and was considered a master carpenter having built most of his own home. He also enjoyed NASCAR as well as a love of corvettes and was an avid Oakland Raiders fan. He is predeceased by his parents: Mildred and Walter Kienzle, his brother, Barry and his nephews; Bruce and Brent, and his great grandson, Luke Dillion Kienzle. Butch is survived by his beloved wife of 55 years, Carol, his loving daughter, Cindy (Bob) Smith, his son, Walter, III, (Nancy), his only only, granddaughter, Courtney, and grandson; Justin Smith, Walter IV, Michael (Nancy), Mark, and Nicholas, his great grandson, Owen Luke, his sister, Joy Hagelin, brother and sister-in-laws Henry and Barbara Wimberg and Robert and Joyce Petrosh, many nieces and nephews, and his "Best Man" and the guy he got into trouble with the most Jimmy Guercioni. Friends and Relatives are invited to gather with the family on Tuesday, October 29, 2019 from 5pm until 7pm at the Wimberg Funeral Home 400 Liverpool Avenue, Egg Harbor City. A memorial service will follow at 7pm. Contributions can be made in Butch's memory to the American Cancer Society or to the Egg Harbor City Volunteer Fire Deparment. For directions and condolences please visit wimbergfuneralhome.com

Walter Raymond Kienzle Jr. "Butch" 74 of Egg Harbor City departed this life and passed away peacefully on Friday, October 25, 2019 at AtlantiCare, Galloway. Butch was born in Egg Harbor City and was a devoted resident all of his life. He dedicated... View Obituary & Service Information

The family of Walter Raymond Kienzle Jr. created this Life Tributes page to make it easy to share your memories.

Send flowers to the Kienzle family.