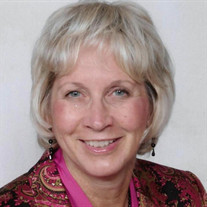 Virginia "Ginny" Schofield passed away on July 16, 2017, with her devoted husband, John and her sister, Karen by her side after battling breast cancer with the most positive attitude imaginable for 3 years. Ginny is survived by her husband, John J. Schofield and her siblings, Ruth A. Larson, Colorado Springs, CO, Robert (Bonnie) Larson, High Bridge, NJ, Karen (Gary) George, Galloway Township, NJ; and John's family, James Schofield, Mount Laurel, NJ, Jane Shearman and Frank Barbera, Williamstown, NJ, and Michelle Casario and Robert Williams, Swedesboro, NJ, along with her beloved nieces and nephews, Christopher (Jennifer) Larson, Brett (Mary) Larson, Alby (Michelle) Shearman, James Schofield, Lauren Schofield, Kyler George, Alyssa George and Cameron Dicker, and their families, as well as many cherished cousins and countless friends. Raised in Bernardsville, NJ, Ginny started her professional music career after graduating with a B.A. in Music Education from Wilkes College and Masters in Performance from The College of New Jersey. She became one of the first female high school band directors while at North Hunterdon High School, NJ. She left there to set up the instrumental music program at Voorhees High School when it opened in 1975. Her love of music and performing brought her to the Atlantic City music scene where she played French Horn and John played trombone at various venues such as Garden Pier and the Smithville Theater in the Round. Ginny and John met when they were in the first casino band, led by Si Zentner, at Resorts International where they played together with acts such as Tom Jones, Frank Sinatra, Cher, Vic Damone, Tony Bennett, Bernadette Peters, and more. They were married that same year, December 26, 1978, their only day off from work. After a career in performance, Ginny and John decided to go into gaming. After opening a number of properties, including The Brighton and Harrah's, Ginny moved over to Trump Plaza. She excelled there for 30 years becoming a pit boss and a shift boss, while John went back to teaching music until he retired from Barnegat Public School System last year. Ginny cared tremendously for all of her casino coworkers, celebrating special occasions with them and also helping them through difficult times. Ginny used her sense of humor and compassion for people to encourage everyone she met. She loved being creative, and was well known for her unique personalized “Viking Greetings” cards which included photos of recipients from years gone by. These were treasured by everyone lucky enough to get one. Early in her management career, she used her computer design skills to prepare training materials and seminars for staff, including multi-cultural awareness and language guides, and was recognized by Trump Plaza with the Visionary Leader Award. Ginny enjoyed raising her pet cockatiels, tending her gardens and grounds and entertaining friends and family. Ginny also loved to travel with her family. A trip to Austria with Michelle, and recent “cruisin’ cousins” trips, especially with Lee Larson and Mary Anne Miller, were cherished memories for her. The family would like to acknowledge the people who cared so well for Ginny at AtlantiCare Cancer Center, and the staff of AtlantiCare Hospice. Ginny loved and lived her life to the fullest, sharing her laughter and joy with all who met her. She always wanted to shine the light on others, not herself. She will be missed by all who knew her. In lieu of flowers, donations to an organization of your choice in Ginny’s memory would be appreciated by the family. Funeral service arrangements will be private according to her wishes. For condolences, please visit wimbergfuneralhome.com.

Virginia "Ginny" Schofield passed away on July 16, 2017, with her devoted husband, John and her sister, Karen by her side after battling breast cancer with the most positive attitude imaginable for 3 years. Ginny is survived by her husband,... View Obituary & Service Information

The family of Virginia "Ginny" Schofield created this Life Tributes page to make it easy to share your memories.

Send flowers to the Schofield family.