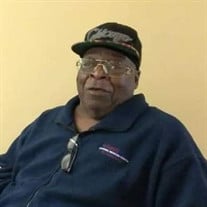 After living a full family and spiritual life Tyrone L. Scott slipped quietly in to God’s heaven on October 20, 2018 at 9:45 am at Atlantic City Medical center in Pomona NJ at the age of 65. Tyrone was born to the parents of the late McKinley Scott and Floy Scott on April 22,1953 at Cook County Hospital in the Southside of Chicago Illinois. At a young age the family relocated to New Jersey and settled in Egg Harbor City. Tyrone reside in Egg Harbor City for over 50 years. Tyrone was a jack of all trades he was a caregiver for many years, was employed in Egg Harbor yacht as a ship builder least by not least he was a correctional officer for Egg Harbor Field Juvenile correctional facility in Egg Harbor NJ. If you knew Tyrone, you know his family was the primary love of his life. Tyrone was known by many names, The Godfather which was his CB handle, Big Roni, and last T Tiny which was given to him by his baby sister Krissy! He was a gentle giant and loved to be around people. Tyrone loved to cook. Whenever there was a gathering you would find him in the kitchen cooking up a storm! He loved to be in the company of his siblings and nieces and nephews and children Tyrone was very dependable and would give you the shirt off his back if you were in need. He was always popping up and visiting. Most of all Tyrone loved to laugh and joke. He would laugh so hard you would laugh because of that. He loved to travel and work on his Oldsmobile or Buick 1970’s cars! His children will miss him greatly. He would travel back and forth to Pennsylvania to care for them and he was always calling to check in on them. He loved taking them to Egg Harbor lake and parks. He was a protector to the fullest and did not play around when it came to their health or welfare. When they grew up he loved for them to come home and fix his computer or just to talk to him over the phone for hours. When you came into the house there was a guarantee of two things, he was either listening to Steve Harvey or Family Feud from the kitchen window! Tyrone loved to joy ride in his gold Lincoln Navigator! Tyrone is predeceased in death by his father McKinley Scott, his grandmother Leola Johnson, a brother Tommy Scott and beloved sister Krista (Krissy) Scott and one grandson Daniel Perez. He is survived by Floy Scott his mother, Four children Laura Perez, Guillermo Perez, Carl Perez (Katrina), Chris Armour, Tyrone Scott Perez. He has 10 grandchildren Qualisa Green, Lewis Green, Antwain Herring, Jada Perez, Onshea Perez, Hannah Perez, Abbagale Perez, Dustin Perez, Rachel Perez, Judah Perez. Two great grandchildren Juelz Ortiz-Perez, Acelynn Sesay. Two special lifetime friend Fayetta Acosta and Brenda Henderson. Special daughter Jeannine Jordan and granddaughter Jayla Mapp. His siblings Michael Scott, Margaret (Charles) Beavers, Charles Scott, Terry Scott, Delbert Scott and also a host of nieces and nephews and cousins. His memorial service and repast will be held on Saturday, November 3rd at The VFW Giunta- Marucci, Post 220 located at 1209 Rt 50. Mays Landing NJ 08330 at 11am. For condolences please visit www.wimbergfuneralhome.com

After living a full family and spiritual life Tyrone L. Scott slipped quietly in to God&#8217;s heaven on October 20, 2018 at 9:45 am at Atlantic City Medical center in Pomona NJ at the age of 65. Tyrone was born to the parents of the late... View Obituary & Service Information

The family of Tyrone L Scott created this Life Tributes page to make it easy to share your memories.

Send flowers to the Scott family.