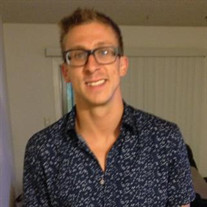 Thomas Rocco Malinowski, of Galloway Township, passed away suddenly on November 11, 2020 as the result of injuries sustained in an automobile accident. Tom was born on December 24, 1986 in Red Bank, New Jersey. He was educated in Galloway Township and graduated from St. Joseph High School, Hammonton. He received his Associate's Degree from Atlantic Cape Community College, achieving the Dean’s List. Tom’s first loves were wrestling and trivia. Starting at a young age, he enjoyed following the wrestlers of WWF (now WWE). If he wasn't attending a WWE (Monday Night Raw) event you can be certain he was watching wrestling wherever he was. Tom traveled all over South Jersey and scoured the internet to add new figures to his impressive WWE action figure collection. When he wasn’t engaged in this, there was nothing he loved more than playing trivia with his mom, a love that began when his mom heard him humming the Jeopardy theme song as a toddler, and later transitioned to trivia nights with his friends at JD’s. Tom was a huge Jeopardy fan. Tom loved literature and was an avid reader. He loved to listen to all types of music and enjoyed watching classic films. He was a true fan of the San Francisco 49ers, Philadelphia 76ers, and the Philadelphia Phillies. He developed a love for tennis, thanks to his Aunt Nina’s early influence. Tom enjoyed running and breaking his own personal best time records with runs up to eight miles in length. The common denominator among Tom’s many interests is that he enjoyed sharing the love he had for these things with the people he loved. While working at The Smithville Inn and Pitney Pub, Tom’s charisma really began to spread. He spent ten years working at The Smithville Inn before adding Pitney Pub into the mix five years ago. Tom was known as “The Heart of Smithville.” Both, The Inn and the Pub became so much more, not just for the simple pleasures the restaurants offered, but for the atmosphere Tom brought. His personality was nothing less than magnetic. He was more than a bartender (although a great one). He was everybody’s friend, their confidant, and a great listener who could raise the energy in the room and the mood of guests, no matter how they felt when they first walked in. The truth is, we could explain Tom for the man he is and for the things he’s done but to be honest, the best way to explain him is the way he made you feel. He radiated a sense of happiness and love. He took your day and helped it reach its highest limits. He was loved deeply and widely, and he loved that way too. He left a prominent mark in this world that could never possibly be forgotten. His soul will forever remain in the hearts of all the people he’s touched. Tom is survived by his beloved mom, Penny Malinowski; his dear Aunt Nina and Uncle Paul Pantozzi; his loving cousins, his cat, Booger; and great friends too numerous to count. He was predeceased by his father, Tom Malinowski. In lieu of flowers, donations may be made to Galloway PAL, 300 E. Jimmie Leeds Rd, Galloway, NJ 08205 in Tom’s memory and would be appreciated. Visitation will be held on Monday, November 16th from 11:00 am to 1:00 pm, with services starting at 1:00 pm at Wimberg Funeral Home, 211 E. Great Creek Rd, Galloway 609-641-0001. For condolences or directions, please visit wimbergfuneralhome.com.

Thomas Rocco Malinowski, of Galloway Township, passed away suddenly on November 11, 2020 as the result of injuries sustained in an automobile accident. Tom was born on December 24, 1986 in Red Bank, New Jersey. He was educated in Galloway Township... View Obituary & Service Information

The family of Thomas Rocco Malinowski created this Life Tributes page to make it easy to share your memories.

Send flowers to the Malinowski family.