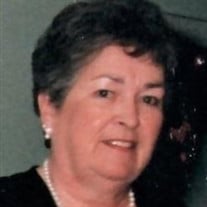 Theresa A. Muller-Dennelly, a summer resident of Four Seasons in Smithville, NJ a permanent resident of Grove Isle, in Vero Beach, FL, passed away peacefully on July 7, 2021 at the age of 89. She was born in the Flushing, Queens, neighborhood of New York City, to the late Rolston and Mary Muller (nee Ferry). After her mother Mary passed away at an early age, Theresa and her younger brother, the late Paul Muller, Sr. developed a special bond with her mother’s sister the late Aunt Rose Henry and Rose’s husband, the late Uncle Paddy Henry. Theresa moved to Great Neck as a child and graduated from Great Neck High School. She soon married and became the cherished mom of four children, Larry Dennelly (Nora) of Batavia, IL, Joan Elkowitz (Tom) of North Palm Beach, FL., Brian Dennelly (Lisa) of Carle Place, NY, and Susan Olson (Greg) of Williamstown, NJ. She worked at the Great Neck Public Schools as an Administrator Assistant in the Pupil Personnel Office from where she retired. Theresa became a much-adored grandma and great-grandma, who was blessed to dote on nine grandchildren, Andy Dennelly, Jenny Elkowitz, Tim Dennelly, Shannon Dennelly, Brenna Dennelly, Jessica Olson, Connor Dennelly, Alex Olson, and Ryan Olson; and three great grandchildren, Quinn Dennelly, Tyler Dennelly, and Brooklyn Dennelly. She was also the sister-in-law of Marcia Muller and an aunt to Paul Muller, Jr., Glenn Muller, Tina Muller-Rubenstein. Theresa was known to be adventurous enjoying travel in her early retirement years. Never one to forget a birthday or holiday, she looked forward to celebrations. She valued the importance of family and the Catholic church, treating everyone with dignity and respect. Theresa will be dearly missed by her family and all who knew her. A mass and celebration of life will be held at a later date, to be followed by inurnment at the family plot in Mount St. Mary Cemetery in Flushing, Queens, NY. Those wishing to honor her life can make a donation in her name to the American Heart Association or the National Kidney Foundation. Arrangements have been entrusted to Wimberg Funeral Home in Galloway, NJ 609-641-0001. For condolences, please visit wimbergfuneralhome.com.

Theresa A. Muller-Dennelly, a summer resident of Four Seasons in Smithville, NJ a permanent resident of Grove Isle, in Vero Beach, FL, passed away peacefully on July 7, 2021 at the age of 89. She was born in the Flushing, Queens, neighborhood... View Obituary & Service Information

The family of Theresa A. Muller-Dennelly created this Life Tributes page to make it easy to share your memories.

Theresa A. Muller-Dennelly, a summer resident of Four Seasons...

Send flowers to the Muller-Dennelly family.