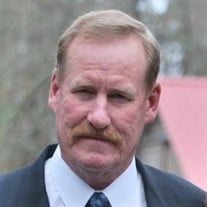 Stephen J. Schroer, 67, of Germania, left this world supported by his loving family after a courageous battle with melanoma. In his teen years he worked at the family masonry business until he realized his passion was in carpentry. For over thirty years Stephen Schroer Construction provided unmatched carpentry and custom construction to the Atlantic County area. He was content and at peace when working in his shop. Anyone that had the pleasure to work with him knew of his organization, attention to detail and creativity. He had a knack for teaching others his craft and was always willing to share his expertise. He and his wife shared a love for working on projects together. From their home of 41 years that they built together, to house flips, to gardening, they were content when being productive. Their biggest legacy as a team will forever be the family cabin they created together. One would have thought such a man would be daunted by raising four girls but he taught them to be able. He was never prouder than when his daughters would join him on a project. His other crowning joys were his grandchildren. Tractor rides with PopPop will be a memory all hold dear. He was predeceased by his father, Henry Schroer. Survived by his high school sweetheart and wife of 47 years, Lillian R Schroer; his mother, Margaret Schroer; his siblings, Kathleen (Robert) Herrmann, Thomas (Susan) Schroer, Robert (RoseMarie) Schroer, and Susan (Charles) Sidwell; his daughters, Pepper (Chris) Blankenship, Laurel (Joseph) Kurtz, Ivy (Adam Wepy) Schroer, Alyssum (Luke) Wepy; his grandchildren, Kylee, Riley, Colby, Barrett, Ubrig, Rocco and Axel; as well as a large extended family and many friends. Arrangements entrusted to Wimberg Funeral Home, 400 Liverpool Ave, Egg Harbor City 609-965-0357. For condolences, please visit wimbergfuneralhome.com. In lieu of flowers donations can be made to the Germania Fire Company or the charity of your choice.

Stephen J. Schroer, 67, of Germania, left this world supported by his loving family after a courageous battle with melanoma. In his teen years he worked at the family masonry business until he realized his passion was in carpentry. For over... View Obituary & Service Information

The family of Stephen J Schroer created this Life Tributes page to make it easy to share your memories.

Send flowers to the Schroer family.