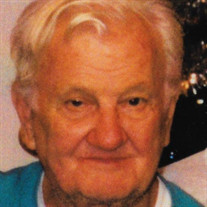 STEPHEN J. KUCHARSKI, age 98, passed away on Wednesday, Oct. 19, 2016, after suffering with late onset Alzheimer’s disease for the past 7 yrs. Born in 1918, in Troy, NY, he was the son of Polish immigrants. Stephen had 3 brothers, Tony, Vincent, and Freddie; and 2 sisters, Jane, Sadie - all deceased. He graduated from Troy H.S. and entered the Jesuit Seminary to study theology, philosophy, and classical languages and become a catholic priest. When WWII broke out, he left the seminary and enlisted in the US Navy, and was stationed in Hawaii. After the war, he passed up a career in naval intelligence to return to Troy NY. There he opened a pool hall with his brothers and joined the coast guard, patrolling the Hudson River. Stephen met his wife, Rose Platania, in her town of Atlantic City. They married in 1959, bought a home on the beach block of her AC Ducktown neighborhood and raised two sons, Joseph and Anthony. They lived in AC for over 40 years, before moving to Absecon in 2001. He was a member of Our Lady Star of the Sea Parish in AC and the St. Elizabeth Ann Seton Parish in Absecon, never missing a Sunday Mass. He worked as a rate clerk for several trucking companies, Yale, Roadways, Treadways, and Gardiner’s for 20 years and retired in 1980. After official retirement, during the casino boom times, he ran the parking lots on Texas Ave. and the boardwalk in AC for many years. Stephen enjoyed going to the beach and reading nightly instead of watching TV. He loved gardening. He was a master gardener; with roof-top tomato and flower boxes and vegetable plots everywhere he could find space in the neighborhood. He also loved horse racing, betting regularly at the AC and Saratoga NY tracks. He loved good food (and a little vino) - the food provided by his devoted wife, Rose, who cooked elaborate meals every day for the family that later included the two grandchildren they enjoyed as they aged. Stephen will be missed by his family, who will always remember him in life with his rosary beads, racing form, newspapers, gardening tools, and glass of red table wine. He is predeceased by his wife, Rose (passed in 2011 at the age of 93). He is survived by his sons, Joseph (Angela) and Anthony; and his grandchildren, Gina and Steven. Visitation will be held at St. Elizabeth Ann Seton Church, 591 New Jersey Avenue, Absecon, on Monday, October 24th from 10:00-11:00 AM followed immediately by a Mass of Christian Burial. Interment with Naval Honor Guard, will follow at Holy Cross Cemetery in Mays Landing. Arrangements have been entrusted to Wimberg Funeral Home, 211 E. Great Creek Rd., Galloway(609)641-0001. For directions or condolences, please visit wimbergfuneralhome.com

The family of Stephen J Kucharski created this Life Tributes page to make it easy to share your memories.

Send flowers to the Kucharski family.