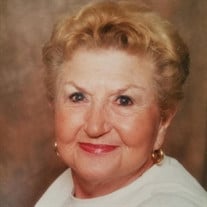 Stella Sloan, 91, died peacefully at Seashore Gardens Living Center in Galloway, N.J., on June 19, 2018. Born December 30, 1926 to Harry Klafter and Gussie Oberhard Klafter in Brooklyn, N.Y., Stella graduated from New Utrecht High School, and began her first job working for a clipping service. In 1947, she married Robert Sol Lanman and they moved to Long Branch, N.J., where son Steven and daughter Deborah were born. They were charter members of Congregation B’nai Sholom. Stella’s good looks and engaging personality led to runway modeling jobs in local department stores in and around Asbury Park. She later became a Revlon representative and subsequently a retail entrepreneur selling handbags and accessories. She was a life member of Hadassah and a skilled bridge player and teacher who achieved Life Master status. For many years, Stella also could be found working at the polls on Election Day. Prior to residing at Seashore Gardens, she lived in Leisure Village West, Manchester for 10 years. Stella was the widow of Meyer Sloan of West Deal and was also preceded in death by her granddaughter, Sheryl Lanman Nichols. She is survived by her son, Steven Lanman and wife, Sandra; daughter, Deborah Bronson; granddaughter, Lisa Bronson and husband, Cem Tanbay; grandson, Scott Lanman and wife, Rachel; and great-granddaughters, Sloan, Leah, Dylan, Naomi, and Reese. A graveside service was held at Beth Israel Cemetery, Woodbridge. Arrangements were entrusted to Wimberg Funeral Home, 211 E. Great Creek Rd, Galloway 609-641-0001 For condolences, please visit wimbergfuneralhome.com. Donations in her memory may be made to either Hadassah or to the Sheryl Lanman Nichols Memorial Fellowship at the Rutgers University Foundation. http://support.rutgers.edu/NicholsMemorial.

The family of Stella Sloan created this Life Tributes page to make it easy to share your memories.

Send flowers to the Sloan family.