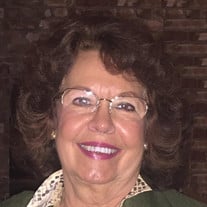 Michael, Shirley Ann, (Collins) “Ginga”, of Absecon, NJ went home to be with the Lord on October 28, 2016 at AtlanticCare Regional Medical Center in Atlantic City, surrounded by her loving and devoted family. Shirley was a beautician for 50 years and practiced in the Pleasantville / Absecon areas. She began her career at Sandys in Pleasantville, continued at Sandys in Absecon and then went on to join Mary McDaniels (Chapman) at The China Doll Beauty Lounge currently in Galloway, where she eventually became the owner and a successful business woman. She enjoyed her career and valued the friendships that she made before unexpectedly retiring in December 2015. She graduated from Mainland Regional High School in 1964 and went on to study cosmetology at Mainland Academy of Beauty Culture. Shirley was the foundation of her family, a fulltime working mother of three and loved being a grandmother. She also enjoyed going to church and spreading the word of the Lord, gardening in her front yard, hosting family dinners, was an avid Elvis Presley fan, and always looked forward to spending time with her husband at the drag races. She is survived by her loving husband, Lawrence B. Michael of 51 years; her three devoted daughters, Shirley Michael- Calimer (Charles), Michele Michael-Zanes, and Lari Allen (Dennis); her sister, Kathryn Lee Rhoades (Collins); her eight grandchildren, Amanda Michael, Cassidy Calimer, Nicholas Calimer, Ashley Calimer, Charles Calimer, McKenzie Allen, Brayden Allen, and the newest addition to her family, Greyson Allen; her two nieces, Kimberly Rhoades and Amber Collins; and her partner in crime, her cat O’Malley. She is predeceased by her parents, Charles and Irene (Brigham) Collins and brother, Thomas Monroe Collins. All are welcome to celebrate Shirley’s beautiful life with a viewing on Friday November 4th at Mainland Baptist Church, 512 S. Pitney road, Galloway NJ, from 6:00-8:30PM and funeral services on November 5th at 11:00AM. Arrangements have been entrusted to Wimberg Funeral Home, 211 E. Great Creek Rd, Galloway(609)641-0001. For directions or condolences, please visit wimbergfuneralhome.com.

Michael, Shirley Ann, (Collins) &#8220;Ginga&#8221;, of Absecon, NJ went home to be with the Lord on October 28, 2016 at AtlanticCare Regional Medical Center in Atlantic City, surrounded by her loving and devoted family. Shirley was a beautician... View Obituary & Service Information

The family of Shirley Ann Michael created this Life Tributes page to make it easy to share your memories.

Send flowers to the Michael family.