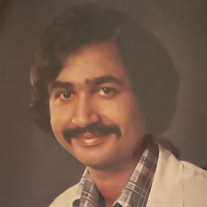 Sekander Ali Ursani, of Smithville, NJ passed away peacefully at home on January 31, 2022 at the age of 71. He leaves a lasting legacy as a husband, father, stepfather, grandfather, brother, and revered physician. Born in Hyderabad, Pakistan, he studied to be a physician at Liaquat University and was recruited by the British National Health Service for a residency in London, England. He immigrated to the United States in 1976 to begin a residency in general surgery, which led to his career as a respected Emergency Room physician. As a practicing physician for over 40 years in Southern New Jersey, he was well known to the local community. Throughout his accomplished career, he served as a medical director at AtlantiCare, designed a new ER, served as the Chief Executive Officer for Virtua Berlin, and retired as a physician advisor for Hackensack Meridian Health. He was fondly known by his colleagues as "Urs" and treated each person with dignity and respect whether it was the famous baseball player Willie Mays whom he treated in the Atlantic City ER or a friend's son or daughter who showed up at his doorstep with a broken bone. Sekander was also a free spirit who enjoyed astronomy watching the stars with his Meade telescope, experimented with his ham radio, and loved Led Zeppelin playing music at his house for his guests. He was predeceased by his first wife, Carol Ursani; his parents, Abdul-Fatah and Shirin Ursani; a sister, Farida; and his stepson, Terry Thompson. He was fortunate to remarry and met Janice Ursani (nee Aaron) whom he enjoyed life with over the last 15 years, including exploring nature and enjoying many trips, especially cruises. He is survived by his son, Jared Ursani (Beth) and his grandchildren, Hudson, Carter, and Bailey, who fondly referred to him as "Papa." Jared and Sekander had a treasured relationship sharing countless memories together, including spending hours boating along the New Jersey coast and a trip of a lifetime to Dubai. He is survived by his stepdaughter, Jennifer Thompson Reimsnyder and her family, Brad, Lauren, and Lindsey. He is also survived by countless friends and his brothers and sisters including, Mushtaq, Rukhsana, Pervin, Rehana, Feroze, Pervez, Sohail, Farzana, and Wasim. He will be deeply missed but leaves a lasting legacy that will be cherished by many and never forgotten. While not deeply religious, he was spiritual and lived by the Zoarastrian motto "good thoughts, good words, and good deeds." A tribute to his life will be forthcoming later this year in coastal New Jersey and will be announced closer to the date. In lieu of flowers, the family asks that donations in his memory be made to the AtlantiCare Foundation or the Friends of Forsythe National Wildlife Refuge. Arrangements by Wimberg Funeral Home in Galloway. For condolences, please visit wimbergfuneralhome.com.

Sekander Ali Ursani, of Smithville, NJ passed away peacefully at home on January 31, 2022 at the age of 71. He leaves a lasting legacy as a husband, father, stepfather, grandfather, brother, and revered physician. Born in Hyderabad, Pakistan,... View Obituary & Service Information

The family of Dr. Sekander Ali Ursani created this Life Tributes page to make it easy to share your memories.

Send flowers to the Ursani family.