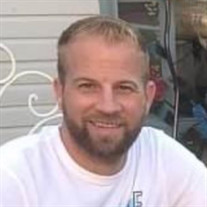 Scott Michael Freeden Jr. passed away suddenly on October 4, 2020 at the age of 40. A memorial service will be held for Mr. Freeden on Friday, October 16th at 7 pm at Wimberg Funeral Home, 211 E. Great Creek Rd, Galloway, NJ 609-641-0001.For information or to send condolences visit wimbergfuneralhome.com. Scott Michael Freeden Jr., 40, of Wilmington, DE. was born in Summit, NJ on August 24, 1980 and was raised in Galloway, NJ. He attended Absegami High School. Sports played an important part of his life from T-ball to Baseball, and he was the Co-Captain of Absegami Cross Country team. There wasn’t a sport he didn’t excel at throughout his life. Scott loved going to country music concerts, and collecting shoes, clothes, and cologne. But the happiest times were the births of his children Scotty and Henley. To quote Scott’s own words, “Grateful to be a Dad to these two wonderful kids! A handful, but the best things to ever happen to me! 3/20 & 6/17.” Scott loved taking Scotty to Six Flags for daring rollercoasters and he took Scotty to iFly last year for his birthday. Scott and Scotty were closest when they were doing things together that were fast and furious. Scott loved singing with Henley (he called her Sweepea) while she danced on his shoes. Henley loved using her daddy’s feet as her personal recliner. Sweepea pulled out all the toys she could find and then crawled all over Daddy because he was the most fun toy to her. Scott was raised by his mother, Catherine Chiola, his father, Scott Freeden Sr., along with his stepfather, Arnold Chiola, and his stepmother, Debra Freeden. Scott is also survived by the loves of his life, his two children, Scotty and Henley Elyse; his grandfather, Richard Fisher; his sisters, Melissa (Rob) and Cheryl; his stepbrothers, David (Hallie) and Kris (Valorie); his nephews, Brandon, Bryce, and Gavin; and his nieces, Anna, Olivia, Alaina, and Riley. He is also survived by many aunts, uncles, and cousins. Scott is preceded in death by his grandparents, Halon and Barbara; grandmother, Anne; stepmother, Debra; and uncles, John and Rennie. The family requests in lieu of flowers, monetary donations be made for Scotty and Henley. Checks should be made out to either Catherine Chiola, his mother, 419 East Elm Avenue, Galloway, NJ 08205 or Melissa Miller, his sister, 22 Fays Court Galloway, NJ 08205, so that funds can be deposited into trusts for Scotty and Henley.

The family of Scott Michael Freeden Jr. created this Life Tributes page to make it easy to share your memories.

Send flowers to the Freeden family.