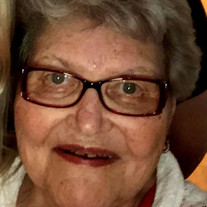 Weber, Sandra J. (Aumack), 83, of Egg Harbor City, passed away on May 13, 2021 with her loving family by her side. Sandra was born on August 14, 1937 in Pomona, NJ to her late parents, Charles and Elaine Aumack. Sandra attended EHC high school and graduated in 1955. In 1956 married the love of her life Albert F. Weber. In 1965 they welcomed their pride and joy, Albert C. Weber, into the world. Sandra was a woman of many trades. She and her beloved husband Albert were the owners of the Weber’s craft shoppe on St. Louis Avenue in EHC and Route 9 in Linwood. Sandra worked for Atlantic City electric, Lenox China and Collective Federal. She also was a substitute teacher in EHC, Greenbank, Mullica and St. Nicholas schools. She made a difference in each child she had taught. Sandra held office for EHC treasurers for many years. After retiring from Lenox China, she returned back to school and graduated at the age of 62 from ACCC for Hospitality management. Sandra loved to travel and to give back to the community. She was an active member in 4-H, People’s choice republican club, EHC historical society and was president for two terms. She was a leader of Rural maid and a judge for favorite food shows. Sandra attended the National 4-H congress in Chicago. She received many awards, such as State and National awards in leadership and while in high school she received Betty Crocker homemaking award. Of the many talents Sandra had, she also wrote a teenage column in the Leader paper. She spent many pleasant hours making memories with her grandchildren and great grandchildren. Predeceased by her loving husband, Albert F. Weber; mother, Elaine; father, Charles; sister, Charlotte; and great grandchild, Kooper. Sandra is survived by her son and daughter-in-law, Albert and Maryann Weber and Michael Weber; grandchildren, Stephanie (Jesse), Ashley (Matthew), AJ (Jackie), Alexis, Jessica (Greg) and Cassandra (Korey); great grandchildren, Rangeley, Levi, Raelynn, Everly, Albert III, Gabrielle, Jillian and Kameron; and sister-in-law, Sharon (Damian), nieces, nephews and cousins. Sandra had many close friends that she cared for and loved. They were always near and dear to her heart. A gravesite memorial service will be held at Egg Harbor City cemetery on May 24, 2021 at 11am. Arrangements have been entrusted to Wimberg Funeral Home in Egg Harbor City. For condolences, please visit wimbergfuneralhome.com. In lieu of flowers donations can be made in memory of Sandra to the Egg Harbor City Historical Society, Elwood Gaskill United Methodist Church and the Egg Harbor City Fire Department.

Weber, Sandra J. (Aumack), 83, of Egg Harbor City, passed away on May 13, 2021 with her loving family by her side. Sandra was born on August 14, 1937 in Pomona, NJ to her late parents, Charles and Elaine Aumack. Sandra attended EHC high school... View Obituary & Service Information

The family of Sandra J. (Aumack) Weber created this Life Tributes page to make it easy to share your memories.

Send flowers to the Weber family.