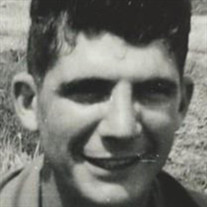 Scanella, Salvatore A. "Sam", - 87, NOVEMBER 9, 1933 – SEPTEMBER 14, 2021 "I've done a lot of things in my life; death is just one of them" Master Sergeant (MSG) Salvatore "Sam" Scanella, Special Forces Group Airborne (SFGA) 82nd Airborne Retired of Tuckerton, New Jersey, passed away peacefully in his home on September 14, 2021 surrounded by loved ones. Born November 9, 1933 in Trenton, New Jersey to Frances and Anthony Scanella, Sam grew up in the Great Depression and Second World War. He enlisted into the Army at the age of 17 and dedicated 24 years of service to the United States Army. Sam is a veteran of the Korean War and Vietnam War where he earned numerous medals including the Bronze Star, the Soldiers Medal and a Purple Heart with two clusters. He also earned several Citations, including the Presidential Unit Citation and the Vietnam Civic Action Unit Citation. Sam married the love of his life, Helen Khauli on June 19th, 1954, in Bennettsville, South Carolina. After retirement, Sam and Helen lived in Tuckerton, New Jersey until her passing in August of 2007. Sam worked for several years at Resorts International Casino Hotel in Atlantic City as a security supervisor. Sam was an avid outdoorsman and loved hunting and fishing. Sam lived his life to the fullest and it overflowed onto all who knew him. Sam is preceded in death by his beloved wife, Helen; his five sisters, Rosie, Connie, Rita, Theresa and Anna; his three brothers, Anthony, Joe and Andy. He is survived by his son, Samuel P. Scanella; his three sisters, Josephine, Grace and Delores; his brother, Dan; along with several nieces, nephews, godchildren and dear friends. He will be particularly missed by his best friend, Mark Emmer and his family as well as his neighbor, Roger Dillon and his family. A military burial and celebration of Sam's life will be held on October 10, 2021, at 2:00 PM, at the Egg Harbor City Cemetery, Moss Mill Road and Hamburg Avenue, Egg Harbor City, New Jersey, 08215. Flower arrangements in memory of Sam can be sent to Wimberg Funeral Home, 400 Liverpool Avenue, Egg Harbor City, N.J., 08215. In lieu of flowers, donations can be sent to Bayada Hospice, 96 East Water Street, Toms River, N.J., 08753, in Sam's memory.

The family of Salvatore "Sam" A Scanella created this Life Tributes page to make it easy to share your memories.

Send flowers to the Scanella family.