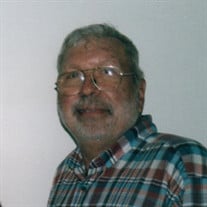 On September 29, 2019, Dr. Rudolf Gerhard Ernst Arndt passed away quietly after a long battle with bone cancer. Rudy was 77 years old. He passed as he was visited by family and many long-time friends. Rudy was a resident of Galloway, New Jersey and an Emeritus Professor of Stockton University. Rudy Arndt was born in Berlin, Germany on October 28th, 1941. His family immigrated to the United States in 1950. He attended Newtown Agricultural High School and graduated in 1959. In 1963, He began his undergraduate studies at Cornell University earning a BS. He continued his graduate studies at Queens College and Cornell University earning a MS and PhD in Animal Biology and Vertebrate Zoology in 1971. Dr. Arndt joined the Stockton faculty in 1974 after working for three years for Ichthyological Associates in Delaware, and retired from the University in 2007. His quiet demeanor and strength of scholarship earned him the admiration and respect of many. His love of Stockton was evident to the very end, and the frequent visits of colleagues and former students affirm the genuine love and esteem held for this son of Stockton. Unlike many biologists today who focus on a narrow field of study, Rudy was a Renaissance biologist interested in everything in the natural world. His foremost passion was herpetology, especially pine snakes and bog turtles, but he developed a strong ichthyological interest which directed both his personal and student focused research. Rudy was a prolific writer. He published over 60 scientific articles and co-authored two books on the fishes of North and South Carolina which co-describe two new species of pygmy sunfish. His greatest legacy is the many students he educated who now work throughout the state and region protecting and conserving the natural resources and endangered species that he so loved. Rudy was an accomplished scientist who remained a kid at heart. He was never happier than when he was wet, muddy and had captured something wriggly or slimy. Rudy will be remembered as a gentle giant whose warm smile and caring affect will be missed by family, friends, colleagues, and students alike. Rudy is survived by his loving sister, Judy (Arndt) Oppedyk, and brother-in-law, Alex Oppedyk, who are very proud of his many accomplishments. All are invited to attend the memorial service to honor Dr. Arndt at Stockton University at the Student Center on Sunday, October 27th beginning at 2:00 PM. Arrangements have been provided by Wimberg Funeral Home, 211 E. Great Creek Rd., Galloway, NJ 609-641-0001. For condolences, please visit wimbergfuneralhome.com. The family requests that donations in lieu of flowers be made to the Meta Arndt Scholarship fund care of Stockton University.

On September 29, 2019, Dr. Rudolf Gerhard Ernst Arndt passed away quietly after a long battle with bone cancer. Rudy was 77 years old. He passed as he was visited by family and many long-time friends. Rudy was a resident of Galloway, New... View Obituary & Service Information

The family of Dr. Rudolf Gerhard Ernst Arndt created this Life Tributes page to make it easy to share your memories.