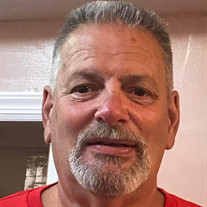 Roy H. Heintz Jr, 63, of Galloway, NJ passed away on Saturday, January 8, 2022. Roy was born to Marietta (Frances) and Retired Galloway Police Chief, Roy H. Heintz Sr, on July 10, 1958, in Somers Point, NJ. Roy was raised in Galloway with his many siblings and graduated from Absegami High School in 1977, where he was a wrestling and football superstar. Roy was the epitome of a selfless man, from volunteer work to his various careers and hobbies, he dedicated his entire life to helping others. In his early years, Roy was a volunteer for Pomona Fire Department. In 1977, Roy joined the United States Coast Guard, where he served honorably before he left for the Police Academy. He began his career as a police officer in Mays Landing. Shortly after, Roy went to work for the Pleasantville Police Department, where he retired as a Lieutenant in 2003 after 25 years of service. While serving the community at Pleasantville PD, Roy served as President of Mainland PBA Local 77 and Chief of the Pleasantville Ambulance Squad. After retiring (for the 1st time) from the Police Department, Roy went back to work at the FAA’s Security Center because Wendy had a never-ending honey-do list. In 2006, Roy became involved with the B.P.O.E (Elks) Organization, working his way through the various ranks of officers, eventually taking the reins of Exalted Ruler of Galloway Elks Lodge #2845. Recently, he was selected to sit on the Veterans Committee at the State level, as well as serving for the South District, District Deputy team. Roy was also an EMS Instructor for Atlantic County, Certified CPR Instructor, and Auxiliary Member of the Absecon VFW Post #9462. He retired for a second and final time in 2020 to help Wendy open up Your Creations Art Studio, where that “honey-do” list became infinite. Roy’s list of accomplishments as an Elk and serving the community is endless. On July 2, 1994, Roy married the love of his life, Wendy. The two spent a plethora of time together on various trips and activities, while their favorite pastime was relaxing and hanging out on the Brigantine Beach. Together they had two children, Rebecca and Sarah. When the girls were growing up, Roy was heavily involved in all of the activities the girls participated in from Girl Scouts and band to Recreational Sports and many more. Not only was Roy an awesome father figure to many, but he was the world's greatest pop-pop to his two grandchildren, James and Olivia. Whether it was tricking the kids into yard work, boogie boarding in the ocean, or getting hollered at for constantly crashing their Power-Wheel quads into each other, they absolutely adored their pop-pop. Roy will be missed deeply by his wife, Wendy (Michelette); his children, Rebecca (Zach) Downey and Sarah Heintz; his grandchildren, James and Olivia Downey; his brother-in-law, Lou Long of whom the two had countless “adventures” together and very much enjoyed each other’s company; and the numerous people in the community that he meant so much to. Roy was predeceased by his sister, Joan (Long); his mother, Marietta (Frances); and his father, Roy H. Heintz Sr. Roy’s life can be honored from 12-3 pm on Sunday, January 16th, at Wimberg Funeral Home in Galloway, with a service starting at 3 pm. In lieu of flowers, the family asks that donations be sent to the “Galloway Elks #2845” - In memory of Roy Heintz Jr - located at 120 S. New York Road, Galloway, NJ, 08205, where the money will be used for various charities near and dear to his heart. For condolences, please visit wimbergfuneralhome.com.

The family of Roy H Heintz Jr. created this Life Tributes page to make it easy to share your memories.

Send flowers to the Heintz family.