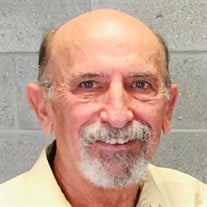 Ronald J. Vignali, 76, of Galloway, New Jersey was called home by the Lord on September 28, 2020. He was born and raised in Egg Harbor City and attended St. Joe’s High School. Upon graduation he continued onto vocational school and became a master electrician. During his professional career he opened his own electrical business, worked as a facilities manager at the Claridge Casino, and on special contracted projects with the Federal Aviation Administration (FAA). He was a member of Local 68 Electricians, NJEG, American Motorcycle Association and received an award of Achievement from Rowan College in Industrial and Commercial Power Distribution. Ron’s greatest achievement was the life he created. He approached life with a positive outlook. He was a deep thinker, which led to many beautiful conversations with those closest to him. He had a caring heart and was always willing to lend a hand for the causes and people he cared about. He was a part of the Beacon Church of Galloway’s praise musical team. His love for music was an unwavering passion that spanned over 70 years and filled his life with musical festivals, hours of dedication in learning new songs, and bluesy jam sessions at family gatherings. He played guitar, banjo, ukulele, piano, and harmonica. He loved exploring and could often be found cruising on his Indian motorcycle, road tripping in the Winnebago, kayaking various jersey waterways, or vacationing to new places. He is preceded in death by his loving wife of 40 years, Judith A. Vignali, and his parents, Josephine and Gino. He is survived by his children, Ronald A. Vignali, Gina M. Hazlet and her husband, Bob, Lynee Lopez, and Antionette DiGioia. He was a dedicated grandparent to Nicholas A. DiGioia (Kelsey), Giana Celli (Dominick), Anthony J. Celli, Gabriella Lopez, Daniel Lopez, and Isabella Lopez. He was also a proud great grandfather to Nicky, Eric, and Valentina. He will also be missed by his nieces and nephews, Lisa Jiampetti, Alexandra Vignali, and Vincent Vignali and many cousins. Memorial services to be held at Wimberg Funeral home in Egg Harbor City on October 6th at 10:30 am. Services will be followed by a funeral procession to Sacred Heart Cemetery in Vineland. In lieu of flowers donations in his honor can be made to Wounded Warrior Project or Musicians on a Mission. For condolences and directions, please visit wimbergfuneralhome.com.

Ronald J. Vignali, 76, of Galloway, New Jersey was called home by the Lord on September 28, 2020. He was born and raised in Egg Harbor City and attended St. Joe&#8217;s High School. Upon graduation he continued onto vocational school and became... View Obituary & Service Information

The family of Ronald J Vignali created this Life Tributes page to make it easy to share your memories.

Send flowers to the Vignali family.