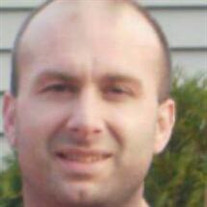 Ronald K. Nefferdorf Jr., 39, passed away on Tuesday, February 28, 2017. Ronnie was born on July 20, 1977, in Atlantic City, NJ to Victoria Champion and Ronald Nefferdorf Sr. He attended Absegami High School in Galloway, NJ. Ronnie was a member of the Painters Union Local 711, realtor for Flag Ship in Atlantic City, NJ and forklift operator at Ready Pak in Swedesboro, NJ. Ronnie was a loving and devoted father to his children, a wonderful son, great brother, a fun uncle, and a helpful nephew. He was great at fixing cars and could fix, repair, and do any job big or small. Ronnie loved the outdoors, fishing, and spending time with his children. He was an advocate for the homeless. Ronnie was a very hard working man, working more than one job with one goal; to provide for his two children. He put his all into everything he did in his life. Ronnie is predeceased by his father, Ronald Nefferdorf Sr.; maternal grandparents, Frances and Charles Schlue; paternal grandparents, Millie and Russell Nefferdorf; uncles, Ricky and Russell Nefferdorf; mother of his children, Brandy Dowdal; and cousins, Amanda, Josh, Carl and Stephanie. He is survived by his children, Jasmine Nefferdorf (10), Rylee Dowdel (6); his mother, Victoria Champion and stepfather, George Piper of Hammonton, NJ; his brother, Brandon Nefferdorf and fiancé, Kate Crouch of Indiana; nephew, Brandon, Jr. and nieces, Heidi and Lucy of Indiana; uncle Charles Schlue and wife, Chrissy of Egg Harbor City, NJ; aunt Joann and Lou Stancampiano of Florida; aunts, Julia, Cherie; and aunt Chris and Steve Beck of Cape May, NJ. Ronnie had many cousins with aunts and uncle unrelated, but they are part of our family. A gathering will be held on Thursday, March 30th from 6:00 to 8:00 PM with a service taking place at 7:30 PM at Wimberg Funeral Home, 400 Liverpool Ave., Egg Harbor City 609-965-0357. For directions or condolences, please visit wimbergfuneralhome.com.

The family of Ronald Nefferdorf Jr. created this Life Tributes page to make it easy to share your memories.

Send flowers to the Nefferdorf family.