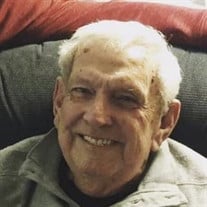 Roland J. (Bud) Coyne of Smithville NJ, formerly of Margate NJ, Swarthmore PA, and Allentown PA passed peacefully with his family by his side at his home on August 19, 2021. He was born to James V. and M. Helen Coyne in Bangor Maine, along with his twin brother Robert on 2/16/31, joining older brother James V Jr. and older sister Constance. Bud attended John Bapst High School in Bangor Maine, served in the United States Airforce during the Korean Conflict, later attending and graduating from the University of Maine at Orono. He married Faith Guptill in 1957. He was employed by Armstrong World Industries until his retirement, and later for Adams in Woodbury NJ before retiring to Margate NJ, later relocating to Smithville NJ. Bud was an avid life long Red Sox fan, enjoyed watching sports on television, visiting Maine in the summer and fishing and was known for his great sense of humor. His greatest delight was in spending time with his 5 grandchildren. He enjoyed cooking and became quite the baker later in life and was well known for his “Pride of Iowa” cookies, his secret recipe lemonade and his homemade crabcakes. Bud is survived by his children, Lauren Coyne, Beth Lewis and Joe (Lois) Coyne, grandchildren Matthew Coyne, Emily Lewis, Allison Coyne, David Lewis and Michael Coyne. Also survived by many nieces and nephews and a special Godson Andrew Terry. He was predeceased by his parents, his wife of 57 years, Faith Guptill Coyne, his sister Connie, brother Bob and his Son in Law Dave Lewis. Arrangements by Wimberg Funeral Home Galloway, by Bud’s request, are private. Interment will take place at a later date at the Atlantic County Veterans Cemetery. The family would like to thank Atlanticare Palliative Care, Visiting Angels and the NJ Health Hospice for their assistance over the past 30 months. In lieu of flowers donations to The American Cancer Society would be appreciated.

Roland J. (Bud) Coyne of Smithville NJ, formerly of Margate NJ, Swarthmore PA, and Allentown PA passed peacefully with his family by his side at his home on August 19, 2021. He was born to James V. and M. Helen Coyne in Bangor Maine, along... View Obituary & Service Information

The family of Roland J. (Bud) Coyne created this Life Tributes page to make it easy to share your memories.