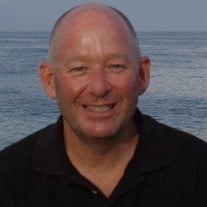 Tingle, Robert ‘Raz’ Gerard of Galloway, NJ went to be with the Lord on Saturday, April 23, 2016. He was born in Upper Darby, PA on October, 24, 1957. Robert was survived by his two daughters, Kimberly Tingle of Newport, RI, Kelly Tingle of Berkley, CA and their mother, Barbara Anne Tingle, to whom he had previously been married to for 29 years. He is also survived by his parents, Henry E. and Julia (nee Bernhardt) Tingle of Galloway, NJ; his siblings, Henry (Linda) Tingle of Philadelphia, PA, Julia (Ralph) De Simone of Galloway, NJ, Bernadette (Rory) Hisel of Conifer, CO, Celeste (Thomas) Amundsen of Turnersville, NJ, Joseph (Kathleen) Tingle of Sewell, NJ, Lois (Thomas) Janke of Philadelphia, PA and Jennifer (Jeffrey) Chomko of West Chester, PA. Robert is also survived by his many nieces and nephews who loved and adored their Uncle Raz. Robert was pre-deceased by his son, Patrick and sister, Mary Louise McLaughlin. Robert's greatest joy in life was being a Daddy to his two beautiful daughters. He was a devout Catholic and avid fisherman. He could often be found in and around his favorite spot, the Vermont Avenue Jetty. Relatives and friends are invited to greet the family on Wednesday, April 27th between 9:30 and 11 am at Our Lady Star of the Sea Church in Atlantic City. A mass of Christian Burial will immediately follow at 11 am. Interment will be private. Arrangements have been entrusted to Wimberg Funeral Home, 211 E. Great Creek Rd, Galloway 609-641-0001. For condolences, please visit wimbergfuneralhome.com. A separate memorial service will be held at a later date in Rhode Island.

The family of Robert G Tingle created this Life Tributes page to make it easy to share your memories.

Tingle, Robert ‘Raz’ Gerard of Galloway, NJ went to be with the...

Send flowers to the Tingle family.