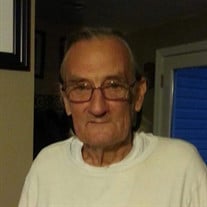 Robert Lester Stelle, 78, passed away Tuesday, January 17, 2017 with his family by his side. He was born to the late Charles and Evelyn Stelle on October 2, 1938. Anyone who knew Bob will miss his prankster personality. He enjoyed living his life without rules and making the most of his time with his family. He would spend many days soaking up the sun, boating, fishing, dirt bike riding, gardening and teaching his grandchildren to do the same. He deeply enjoyed being with his children and grandchildren as well as caring for the family dogs. Prior to his later years he worked hard as a contractor in the Tri - State area but was most proud of the homes he worked on in Cape May. He is survived by his children Carole C. Stelle and her fiance Charles Sorg, Robert A. Stelle and his companion Amber Marino, Michele Stelle and husband Ken Buckley and Georgianne Stelle. He was pre-deceased by his daughter Suzanne Stelle and older son Robert L Stelle (Bubba). Bob had 23 grandchildren in all, Katie, Mark, Richie, Marissa, Robert (JR) Isabella, Brandon, Adalyn, Desiree, Dana, Shannon, Melissa, Tara, Amanda, Daniel, Renee, Sandra, John, Evan, Anthony, Cole and Braelyn. He is predeceased by Victor Tarkan. He was fortunate enough to have known great grandchildren as well, Aiden Anthony, Emalyn, Jacob, Enzo, Aiden, Gavin, Royce, Mckenna, Rylie and Bryson. Bob came from a big family which included ten siblings, 5 who have survived him, Barbara Barnes, Penny Dibenedetti, Charlie Stelle, Alva Stelle and Diane Burmeister. He requested that his family not have a memorial service when he passed away but to celebrate his life and have a party in his honor. A private gathering will be held on January 28, 2017 at 1:00 pm. Please contact his children, Robert Anthony or Carole for any details. In Lieu of flowers please donate to any animal rescue group or the ASPCA for his love of dogs.

Robert Lester Stelle, 78, passed away Tuesday, January 17, 2017 with his family by his side. He was born to the late Charles and Evelyn Stelle on October 2, 1938. Anyone who knew Bob will miss his prankster personality. He enjoyed living his... View Obituary & Service Information

The family of Robert Lester Stelle created this Life Tributes page to make it easy to share your memories.

Send flowers to the Stelle family.