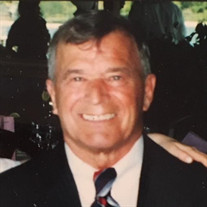 O’Neill, Robert “Bob”, 87, of Mays Landing, formerly of Colts Neck, passed away peacefully at home on July 21, 2018 surrounded by his loving family. Bob fought a long and courageous battle with a progressive neurological disease, but was ready to be reunited with his wife, Peggy, who had recently passed in May. Born in Jersey City, growing up the youngest of eight, Bob learned the true meaning of family and sacrifice. He graduated from Lincoln High School and served in the U.S. Army. Bob and his wife, Peggy, met at a school dance and were married for 63 years. Together, they had six daughters, who deeply appreciated his love, hard work, and generosity for his family. Bob was a self-employed contractor who built their family home in Colts Neck. Together, Bob and Peggy created a warm, welcoming home for family and friends. Bob was multi-talented; he acquired his pilot license and was a self-taught musician and artist. Growing up, his daughters would often hear him singing and playing various instruments around the house. His grandchildren share in the memory of their grandfather’s paint room, where he created his signature masterpieces. Bob passionately loved nature and sports, as he would often be found taking care of animals, watching ball games and coaching his girls. Bob showed a strong love of life and continued his devout faith as he fought through his declining health in later years. His family admired his strength and perseverance. They are at peace knowing he is dancing with his beautiful wife once again. Bob is survived by his six daughters, Robyn Begley (Jim), Laura Grasso, Pam Hart (the late Ray), Debbie Castellano (Joe), Missy O’Neill (Joe), and Erica Marsh (Clint). “Pop” will be fondly remembered and greatly missed by his thirteen grandchildren and three great grandchildren. The family will gather together for a private funeral Mass. The family extends its sincere gratitude and appreciation for the overwhelming support, thoughts, and prayers the have received. Donations may be made in memory of Robert O’Neill to the AtlantiCare Foundation/Hospice. Arrangements have been entrusted to Wimberg Funeral Home, 400 Liverpool Ave, Egg Harbor City, 609-965-0357. For condolences, please visit wimbergfuneralhome.com.

The family of Robert O'Neill created this Life Tributes page to make it easy to share your memories.

Send flowers to the O'Neill family.