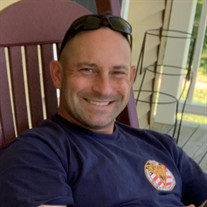 Robert James McCarty Il, 43 years old went home to be with the Lord on Saturday, August 14, 2021 after a courageous battle with pancreatic cancer. Bob will be remembered most by his smile as well as his ability to talk to anyone and everyone he met. Bob was a lifelong resident of Galloway Twp. He was a member of Troop 76 where he obtained the rank of Eagle Scout. Bob graduated class of 1996 from Absegami High School. He attended the University of Delaware and Stockton University. In January of 2001, Bob joined the Atlantic City Fire Department and had served for the last 20 years. On September 28, 2019, he obtained the rank of Captain. While on the fire department, Bob decided he wanted to join the Military. Bob served both the United States Marine Corps Reserves in Red Bank, NJ and the NJ Air National Guard. In 2005, Bob was an honor graduate of the Louis F. Garland Department of Defense Fire Academy. In 2006 and again in 2007, he was deployed in support of Operation Iraqi Freedom. Bob was currently serving as Staff Sergeant with the 177th Fighter Wing Fire Department. Bob loved cooking gourmet meals. He was always willing to help anyone in need and was a friend to all. He was very talented and could build or fix anything. He was the best Son, Husband and Father one could pray for in life. Bob was predeceased by his Grandparents, John and Louise Roth and Charles and Ruth McCarty. Bob leaves behind to cherish his memory forever his best friend and love of his life, his wife, Cheryl. Their children; Devin, Emily, Robert and Ryan. He also leaves behind his loving Mother and Father; Robert and Mary, Brother Kevin, Mother-in-law Alice(Pat), Father-in-law Richard, Sisters-in-law Jenny(John) and Amy, Brother-in-Law Joey (Leigh), his nieces, nephews, aunts, uncles, cousins and friends. His extended family; ACFD, ANG and New Hope Fellowship. A special thanks to the countless number of people who’ve supported our family during this most difficult time. There will be a viewing from 9:00 am - 12:00 pm on Friday August 20th @ Beacon Evangelical Church 420 6th Avenue in Galloway with a service to immediately follow. Burial will be at Miller’s Cemetery, N. Maple Avenue New Gretna, NJ. Arrangements are entrusted to Wimberg Funeral Home of Galloway. In lieu of flowers, the family request donations be made to the Pancreatic Cancer Action Network. www.pancan.org

Robert James McCarty Il, 43 years old went home to be with the Lord on Saturday, August 14, 2021 after a courageous battle with pancreatic cancer. Bob will be remembered most by his smile as well as his ability to talk to anyone and everyone... View Obituary & Service Information

The family of Robert J McCarty II created this Life Tributes page to make it easy to share your memories.

Robert James McCarty Il, 43 years old went home to be with the...

Send flowers to the McCarty family.