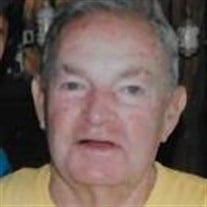 Robert J. Hare, 82, went to be with the Lord surrounded by his loving family on Thursday, May 19, 2016 after a heroic battle with cancer. He was born in the Germantown area of Philadelphia on August 29, 1933 and moved to New Jersey in 1950. After 38 years at Lenox China, he retired and extensively traveled with his lovely wife, Margaret. He served in the Army from 1956-1958 and then served as a reservist for 4 more years. To support his family he also worked as a bus driver, at Hoenes gas station, Peter Lumber Company, and as a milk man. He was a volunteer firefighter with the Cologne Fire Department since 1958 and a charter and life member. He loved to cook the chickens for the Cologne Fire Department's Chicken Barbecue. He encouraged several of his son's and grandson's to volunteer as firefighters. He was a diehard Eagles fan. He enjoyed camping, ice fishing, hiking, clamming, the beach, Hozzie, Meany Greeny, and amusement rides; but above all he enjoyed time with his family and friends. He was a devoted Catholic and loved his Lord. He is survived by his devoted wife of 60 years, Margaret; his children, Pat (Terry), Vince (Ellen), Chris, Tony (Debbie), Larry (Terry), Cecelia (Louie), Kevin (Donna), and Eddie (Lisa); his sister, Marilyn, 'Lynn' (Smitty); 15 grandchildren, Michelle, Nicole (Jeff), Timothy (Samantha), Allyson (Troy), Joshua (Tera), Tiffany, David, Melanie, Deanna, Austin, Kaitlin, Jessica, Ian, Rachel, and Robert; 7 Great Grandchildren, Evan, Stefanie, Chelsea, Stephen, Logan, Sophia, and Leina Jade. He is predeceased by his father, William, mother, Marion, and brother, Bill. Visitations will be Thursday, May 26, 2016 from 9:00 to 12:00 PM at Saint Vincent de Paul Church in Mays Landing with a Mass of Christian Burial at 12:00 PM. Interment will immediately follow at Holy Cross Cemetery. Arrangements have been entrusted to Wimberg Funeral Home, 400 Liverpool Ave., Egg Harbor City 609-965-0357. For condolences, please visit wimbergfuneralhome.com. In lieu of flowers, donations may be sent to Deborah Heart and Lung Center or Holy Redeemer Hospice Care.

Robert J. Hare, 82, went to be with the Lord surrounded by his loving family on Thursday, May 19, 2016 after a heroic battle with cancer. He was born in the Germantown area of Philadelphia on August 29, 1933 and moved to New Jersey in 1950.... View Obituary & Service Information

The family of Robert J Hare created this Life Tributes page to make it easy to share your memories.

Send flowers to the Hare family.