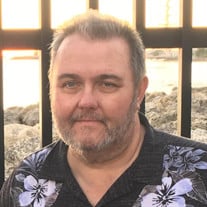 Robert Anthony Garrod, 66 of (Laureldale) Mays Landing, passed away on February 9, 2021 from COVID 19 in AtlantiCare City Division. Robert was born and raised in the Ducktown section of Atlantic City. He and his family were faithful members of Greentree Church. Robert is survived by his loving wife, Sharon of 38 years; their children, Christopher Michael Garrod, Laura Rose Garrod, and Sarah Anne Dougherty (Brandon); and Bob’s 22-month-old grandson, Henry. Due to the virus, a Graveside Funeral Service will be held at Union Cemetery Somers Point Road in Mays Landing on Tuesday, February 16th at 1:00 PM. Bob was an only child, born to Robert McNeil and Connie (Toscano) Garrod. He attended Our Lady Star of the Sea grammar school, Holy Spirit High School, and graduated from both Atlantic Community College and Stockton State College. Bob met his wife Sharon (Tapken) Garrod in Atlantic City. After two weeks of dating, Bob proposed. One year later, they were married. They were blessed with 3 children and one grandchild. Bob was a loving father and he was always there for his family. In his younger years, he surfed professionally and won several competitions. He also enjoyed time on his own boat. He was a very competitive dancer, and met his wife after winning a dancing contest. In the past, Bob was a long-time member of the A.C. Moose Lodge 216 and the Yacht Club of Pleasantville. As a teenager, he worked at the Steel Pier, on the Atlantic City Boardwalk, as well as the Historic Ritz Carlton. Bob was a Blackjack/Craps dealer, starting at Resorts International’s grand opening. When Tropicana opened, he worked as a Craps box person, Craps floor person, and a Blackjack floor person. Bob always knew the right answers and quickly calculated the payouts. Finally, Bob went to work at the Showboat Casino for many years, and retired in 2002. Bob lived an adventurous life and loved being around people. He went on a Route 66 road trip with his family. He traveled all around the US, from Maine to the Florida Keys, Chicago, St. Louis, Houston, and along the California coast. He also visited Mexico and the Caribbean. Bob liked making people happy and smiling. He didn’t mind looking a little ridiculous if it meant making his family, and especially his grandson, laugh. His grandson’s face would always light up every time he saw him. Over the years, Bob had several health issues, but always remained positive. He had a burst appendix. In 2002, he had a brain aneurysm and went blind for a year. He was a passenger in a car accident. He survived advanced stage colon cancer. A diabetic for over 37 years, his flat foot caused some infections. Still, Bob would tell everyone he met that God saved him, and he’s so happy and blessed to be alive. Bob survived all of this, but not the COVID-19 virus. After his last breath, God took him home, where there is no more pain. Despite the loss of my beloved husband of 38 years, we hold on to the joy of knowing where he is. “Covid-19 Memorial Fund for Robert Garrod” GoFundMe page has been set up at https://gofund.me/93c99878 to help pay for funeral expenses.

Robert Anthony Garrod, 66 of (Laureldale) Mays Landing, passed away on February 9, 2021 from COVID 19 in AtlantiCare City Division. Robert was born and raised in the Ducktown section of Atlantic City. He and his family were faithful members... View Obituary & Service Information

The family of Robert Anthony Garrod created this Life Tributes page to make it easy to share your memories.

Send flowers to the Garrod family.