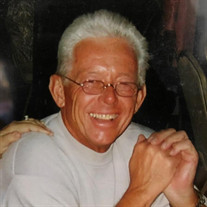 Eger, Robert J. (Robin), age 78 of Galloway Twp., passed on January 17, 2021. Robin was born in Atlantic City and raised in Venice Park. He was a great athlete both in St. Nicholas Grammar School and Holy Spirit High School. He was a well respected electrician with IBEW 351, making many lifelong friends through his trade. He also remained friends with many of his HSHS class of l961 members, enjoying reunions and events over the years. He had many friends on the Ventnor beach and special neighbors on Sturbridge, Ct. In 1964, he married his sweetheart, Laura, and became an honorary Italian, embracing Laura’s family and Italian cooking as his own. Robin was an avid golfer and his favorite place away from home was Charleston, SC, where he enjoyed numerous golf and family vacations. After his retirement he was delighted to work part time for Vista Convention Services, there also making lifelong friends and a few “adopted” sons, E.J. and Kevin King. Robin loved his children, Rob and Missy, and adored and spoiled his four grandchildren. His other passion was his vegetable garden, where he worked outside tirelessly for hours. This was a true feat for a city boy. He amazed everyone with his herbs, tomatoes and peppers, even having others come over to ask him for advice! He will truly be remembered for his bravery and stamina during his entire illness. And that his greatest fear was not the cancer, but losing his hair! God spared him that. Robin was a faithful member of St. Elizabeth Ann Seton Church and one of the top captains of the Dollar of the Week Club, often causing extra work and lots of laughs with church secretary, Margie Quigley. Robin is predeceased by his parents, Bob and Clarice Eger, and by his cousin, Bob Brenner. Robin is survived by his wife of 56 years, Laura; his children, Rob Eger and Melissa (Thom) Perkins; his grandchildren, Laura Hope, Emily Joy, Matthew and Selah Grace. He is also survived by his brother, Jeffrey (Bonnie) Eger; his sister, Linda McLaughlin, and her children, Michele Allen and Ryan McLaughlin; and his brother, Michael Eger and his children, Michael, Jake and Aiden. He is also survived by his brother-in-law, Tony (Kathy) Tabasso and their children, Tony Jr., Rocco, Jenna and Laura Grace; and by cousin, Frank (Marilyn) Tabasso, who was with him every step of his health journey. Robin had two end of life request. First, he wished to thank all of his amazing friends and family over the years. You know who you are! He also did not want a viewing. Special thank you to Dr. Ajay and wonderful staff. His funeral Mass will be at 11 am on Saturday, January 23rd at St. Elizabeth Ann Seton in Absecon, NJ. Sadly, due to Covid restricitions, seating is limited, family will be given preference. Burial will be private at Holy Cross Cemetery. Arrangements have been entrusted to Wimberg Funeral Home in Galloway. For condolences, please visit wimbergfuneralhome.com.

Eger, Robert J. (Robin), age 78 of Galloway Twp., passed on January 17, 2021. Robin was born in Atlantic City and raised in Venice Park. He was a great athlete both in St. Nicholas Grammar School and Holy Spirit High School. He was a well... View Obituary & Service Information

The family of Robert J Eger created this Life Tributes page to make it easy to share your memories.

Send flowers to the Eger family.