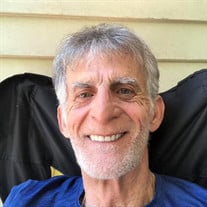 Robert Michael DiCesare Sr., 73 of Galloway Township passed away peacefully on September 24, 2021. Robert was born in Yonkers, NY on August 20, 1948. He graduated from Saunders Trade and Technical high school. He received an honorable discharge from the United States Army in 1969. On November 22,1980 he married his wife Connie. On May 27,1981 and August 20,1998, his two children were born. Robert was a devoted husband and father as well as an avid musician for the majority of his life, traveling the world as lead singer and guitar player in various bands. Robert was beyond musically talented and could hear a song one time and have the innate ability to play it back with precise expertise. He most recently retired from the Galloway Twp Board of Education as a custodian after twenty one years, to which he was known for making co-workers laugh and working extremely hard. Robert will always be “Poppy” to his three grandchildren; Giabella Bailey, Brielle Bailey, and William Bailey, Jr. He absolutely adored spending time with them and celebrating all of their milestones. He was a true animal lover, particularly toward his dog and two cats. (Burgerman, Nibblet, and Zoe) Animals gravitated to him throughout his whole life, most likely due to his calm and gentle nature. Robert knew how to cheer anyone up with his sense of humor and silliness that could light up any room. He was the best advice giver and during difficult times said, “It will be ok. You just have to fall back and regroup.” He loved to eat pasta and anything else from his Italian heritage. He will be missed beyond any possible measure by his family, friends, and everyone who knew him. No words will ever be enough to express how loved he is. Robert is survived by his wife, Connie DiCesare (nee Clagett); his daughter, Melissa DiCesare-Bailey and her husband, William Bailey, Sr; his son, Robert DiCesare, Jr.; three grandchildren; his sister, Anne DeRusso and his brother, Louis DiCesare. as well as nieces and a nephew. He is predeceased by his parents, Louis and Margaret DiCesare; his brother Joseph DiCesare, and his brother Paul DiCesare. as well as nieces and a nephew. Friends are invited to attend a Catholic mass that is scheduled for 11:00 a.m. on Friday, October 1st at Our Lady of Perpetual Help in Galloway Township to celebrate Robert’s life. Cemetery service will be private. Arrangements have been entrusted to Wimberg Funeral Home in Galloway. For condolences, please visit wimbergfuneralhome.com.

The family of Robert Michael DiCesare Sr. created this Life Tributes page to make it easy to share your memories.

Send flowers to the DiCesare family.