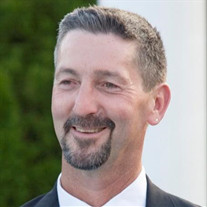 Richard P. Wilson Jr., 64, Absecon, NJ passed away on October 17, 2019 after a brief battle with cancer. He was born on April 14, 1955 in Atlantic City, NJ. Richard was a member of the Painters’ Union Local 277. He was a professional referee and umpire. Richard was an avid fan of all Philadelphia sports teams. In high school, he was a champion distance runner and star baseball player. In later years, Richard was an enthusiastic softball player, sponsoring and managing the RW Club softball team. He also coached numerous sports teams, including those of his children. An outstanding athlete, Richard excelled at a variety of sports, with the exception of golf, which continued to frustrate him throughout his life. However, on one lucky occasion he managed to score a hole in one, a fact which he never let anyone forget. He is predeceased by his grandparents, Dr. Lawrence and Harriet Wilson and Gustav and Helen Evinski as well as his father, Richard P. Wilson Sr. Richard is survived by his mother, Barbara; his children, Jamie Jarrin (Luke) and Richard P. Wilson III; his grandchildren, Dylan and Shane Jarrin; his siblings, Michael L. (Tracy), BG Kelly (Bill), and Tracy Crines (Dan); his nieces and nephew, Alexa, Kira, Emma and Max Kelly, Cameron and Logan Crines, and Phylicia Parsons; and his loving partner, Marilyn Ryan. Visitation will be held on Friday, October 25, 2019 from 3:00 to 4:00 PM with a memorial service at 4:00 PM at Wimberg Funeral Home, 211 E. Great Creek Road, Galloway, 609-641-0001. For condolences or directions, please visit wimbergfuneralhome.com. In lieu of flowers, donations to Saint Jude’s Children’s Hospital.

The family of Richard P Wilson Jr created this Life Tributes page to make it easy to share your memories.

Send flowers to the Wilson family.