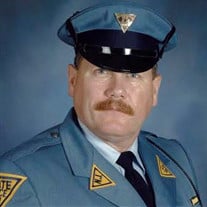 Richard W. Hendrickson #3108R, 65, of Mullica Township, passed away unexpectedly August 25, 2018. He is survived by loved ones including his three children and their families; Eric & Corie (Shaughnessy) Hendrickson, Laura (Hendrickson) & Richard Engelmann, and Sarah (Hendrickson) & Eric Horst, all of Mullica Township. He was very proud to be called Pop-Pop by his 7 grandchildren; Evan, Wyatt, Emma, Mason, Leah, Cooper & Dylan. Survived as well by his sister and her family, Donna (Hendrickson) & Roland Marsh. Richard is preceded in death by his parents, Samuel & Geraldine (Normile) Hendrickson and wife of 39 years, Lisa (Cavileer) Hendrickson. Dedicated father, husband, and friend, Richard raised his family in Mullica Township, instilling in them the importance of family, responsibility, hard work, and integrity. He loved the quiet outdoors that living in Mullica provided and the small-town atmosphere where he could go just about anywhere and run into a friend. Richard proudly served as a New Jersey State Trooper for 28 “legendary years.” He graduated the NJ State Police academy on May 20, 1977 as a member of the 92nd State Police Class. Richard retired on December 1st, 2004, having rose to the rank of Sergeant First Class. During his career he was a member of the TEAMS Unit, the Tactical Patrol Unit, a firearms instructor, and was selected many times to be a Coach, mentoring young Troopers. He received yellow and blue ribbons for exceptional service as well as many Colonel’s letters and commendations throughout his career. Richard spent the majority of his time working alongside fellow Troop “A” road Troopers whom he often referred to as the backbone of the organization. Second only to his family, nothing was more important to him than being a “Trooper’s Trooper.” Rich was an avid hunter and marksman. He would travel to hunting camps in West Virginia, Maine, and Pennsylvania with family and friends, where he was the self-proclaimed “Camp Captain”. Recently, he enjoyed salmon fishing adventures to Cordova, Alaska. Richard’s desire to learn about the fraternity of freemasonry was extremely important to him. He was a duel member of Unity Lodge #96 in Mays Landing and the Hiram T. Dewey Lodge #226, Egg Harbor City. Assuming many roles, he moved through the ranks and ultimately sat as Worshipful Master of the Hiram T. Dewey Lodge in 2017. Forging friendships with his fellow brothers, Richard appreciated the traditions and history of the brotherhood. In retirement Richard would joke he was busier now than when he was working. He’d spend his time roasting pigs “to perfection” for various charities, spending time visiting family & friends, taking long rides touring south jersey and always opting for the scenic route. Known as “Big” to friends, Richard offered a strong, impressionable handshake, and brought a smile wherever he went. Richard returned to his love of riding Harley Davidson motorcycles in 2014 and got back on the road. With his companion and dear friend, Pam Logiovino of Mullica Township, they spent time riding, traveling, and enjoying each other’s company. A gathering celebrating his life will be held on Monday, September10th from 10:00 - 12:00 PM and again from 2:00 - 5:00 PM with the service starting at 5:00 PM all at Wimberg Funeral Home, 400 Liverpool Ave, Egg Harbor City, NJ 609-965-0357. For condolences or directions, please visit wimbergfuneralhome.com. In lieu of flowers, donations would be appreciated and accepted to the Northfield Masonic Dyslexic Learning Center, 2000 New Road, Northfield, NJ, 08225, in honor of Richard Hendrickson.

The family of Richard W. Hendrickson #3108R created this Life Tributes page to make it easy to share your memories.