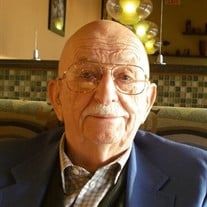 Richard C. French Uncle Dick was a beloved uncle, great uncle, and great–great uncle. Above all, he was a gentleman – the epitome of kindness, politeness, grace, and generosity. He was born Richard Collins French in Camden, NJ, on December 11, 1922, and passed away on April 1, 2016, in Frederick, MD. The youngest of four children of Samuel J.T. French and Alma Ashley Cavileer French, he excelled in science, graduating from Rutgers University and then receiving a Ph.D. in Plant Physiology-Biochemistry from Purdue University in 1953. During World War II, Dick served in the Army Air Corps in the Southwest Pacific as a cryptographic technician. Dick was a plant physiologist at the USDA lab in Fort Detrick (Frederick, MD). His research and experiments led him to write and publish numerous articles about fungal spores and seed germination. In 1995, he retired after 43 years of federal service. He belonged to several organizations including the VFW, the American Legion, the American Chemical Society, the American Camellia Society, the Atlantic County New Jersey Historical Society, and the United Methodist Church. Uncle Dick shared his love of plants, photography, family genealogy, Port Republic (NJ), politics, witty puns, and the clarinet with his many relatives and friends. He is survived by seven nieces and nephews and their families: Neil Thompson (Littleton, CO), Ardrey Bacino (Dover, DE), Samuel T. French III (Santa Rosa, CA), Richard Thompson (Moorestown, NJ), Susan Perri (Port Republic, NJ), Daniel French (Somers Point, NJ) and Thomas Thompson (Moorestown, NJ). He was also blessed to have loving neighbors in Frederick, Harold and Carol Johnson and kind caregivers at Glade Valley Center. He was predeceased by brothers, Nelson G. and Samuel T., Jr., and sister, Lillian French Thompson. For family and friends, there will be a time of visitation at 10am on Friday, April 8th, at the Wimberg Funeral Home 211 E. Great Creek Road, Galloway 609-641-0001. A memorial service is scheduled for 11am, to be followed by interment in the Port Republic Cemetery. For directions or condolences, please visit wimbergfuneralhome.com.

Richard C. French Uncle Dick was a beloved uncle, great uncle, and great&#8211;great uncle. Above all, he was a gentleman &#8211; the epitome of kindness, politeness, grace, and generosity. He was born Richard Collins French in Camden, NJ,... View Obituary & Service Information

The family of Richard C French created this Life Tributes page to make it easy to share your memories.

Send flowers to the French family.