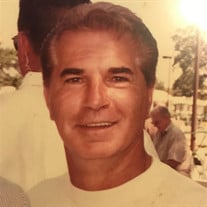 Richard Louis DeFeo, of Hamilton Township, Atlantic County, peacefully left this world on Friday, September 7, 2018 with his loving family holding him close. Richard was born in Williamstown, New Jersey. He resided in Mays Landing where he and his bride, Karen established a beautiful home in the Laureldale area. Rich always had a fascinating story to tell whether boasting of being on a movie set with Sissy Spacek; winning the affections of his young, love Karen; going undercover in a top-secret mission or building a magnificent deck or structure. He’ll be remembered for his love of a good cigar, polished gold jewelry, sentimental tattoos, driving the tractor with the dog on his lap, pride in America, his shiny corvette and truck, a private office where friends could visit or call, and his Egyptian antics with Mohammed & Bob. Friends will also recall his running for Hamilton Township Committee, serving as a member of the Hamilton Township MUA, Atlantic County Republican Committee, and honorary commander at McGuire Air Force Base, volunteering to deliver food to First Responders in the wake of the September 11th terrorist attack on NYC and most especially, his deep and abiding love for his family. He would truly do anything for those he held dear, perhaps most publicly evidenced by his work with the families of Buddy Ball Sports League, an organization he co-founded. Buddy Ball gave challenged children the opportunity to experience softball, bowling or other sports when paired with another child compensating for their disability. The pure joy and friendships that resulted Buddy Ball were absolutely awe-inspiring. Rich DeFeo was also a driving force behind bringing the Vietnam Veteran’s Memorial Mobile Wall – a replica of the original in D.C. – to Atlantic County, enabling our community to pay respect to these heroes without having to travel out of state. Richard working history includes that as President/Owner of Deck's Plus; Media Consultant for the Atlantic City Race Course; Area Leader for the Atlantic County Board of Elections. Richard’s endeavors were near always a family-affair, with Karen and their children never far behind in supporting their husband and dad. In mid-June of this year, Richard was predeceased by his beloved son Frankie after a devastatingly short illness. His mother-in-law Sandra Gallo subsequently passed in late August. A series of health issues followed for Rich, and these ultimately grew too much for him to understandably overcome. On the evening of September 7th, Richard joined his beloved son Frankie to hunt & fish in the heavens above. Richard leaves behind his amazing wife, Karen DeFeo; sons, Lou DeFeo and Tony DeFeo; daughter, Jackee Ross; sister, Toni Kirsch; and granddaughters, Mia, Alisandra, and Olivia. Rich is also survived by his four-legged, best friend, Sandy. A viewing and memorial service will take place on Saturday, September 22nd at Wimberg Funeral Home at 400 Liverpool Ave in Egg Harbor City, New Jersey. Friends may visit between 12 and 2 pm. In lieu of flowers, the family requests donations to granddaughter Mia’s GoFundMe account at https://www.gofundme.com/education-for-mia-defeo?member=420780.

Richard Louis DeFeo, of Hamilton Township, Atlantic County, peacefully left this world on Friday, September 7, 2018 with his loving family holding him close. Richard was born in Williamstown, New Jersey. He resided in Mays Landing where he... View Obituary & Service Information

The family of Richard Louis DeFeo created this Life Tributes page to make it easy to share your memories.

Send flowers to the DeFeo family.