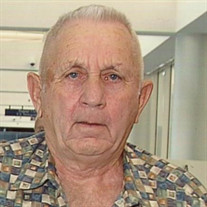 Richard L. Calimer, Sr., 86, of Galloway, passed away at home, Sunday, September 4, 2016 surrounded by his loving family after a courageous battle with cancer. Richard was born in Philadelphia, February 26, 1930 to the late Charles and Magdalena Calimer. He graduated from Egg Harbor City High School and went on to service in the US Navy during the Korean War. He played for the Hammonton Peaches Football. He was a Special Officer with the Galloway Twp. Police. He was involved in the formation of the Atlantic County Jr. Football League. Richard was a coach for the Egg Harbor City Crusaders and Galloway Twp. Mustangs. He was the co-owner of I&L Decorating in Millville, NJ. Richard was a Past member and trustee of the Galloway Twp. Ambulance, Past Chief and Life member of the Pomona Vol. Fire Co., member of the NJ Fire Chiefs Association, member of the Galloway Twp. American Legion Post #340 and Galloway Twp. VFW. Richard was also a past member of the Greater Egg Harbor Regional School Board and past Coordinator of the Galloway Twp. Office of Emergency Management. He is predeceased by his siblings, Charles Calimer and Delores Kohl. Richard is survived by his loving and devoted wife of 62 years, Vida; his children, Richard Calimer, Jr. (Pam), Renee Tarby (Robert, Sr.) and Rodney Calimer (Linda); his grandchildren, Robert Tarby, Jr. (Betsy), Ryan Tarby, Caitlin Calimer, Tara Heath (Matt), Tyler Calimer, and Trevor Calimer; his great grandchildren, Makayla Heath and Mae Tarby; his sibling Betty Jane Sqarlata; and sister-in-law, Dorothy Calimer. Visitation will be held on Thursday, September 8th from 6:00 to 8:00 PM and again on Friday, September 9th from 10:00 to 11:00 AM with a service beginning at 11:00 at Wimberg Funeral Home, 400 Liverpool Ave., Egg Harbor City 609-965-0357. Interment will immediately follow at the Germania Cemetery in Galloway. For directions or condolences, please visit wimbergfuneralhome.com. In lieu of flowers, a donation may be made to the Pomona Volunteer Fire Company, PO Box 1086, Pomona, NJ 08240.

Richard L. Calimer, Sr., 86, of Galloway, passed away at home, Sunday, September 4, 2016 surrounded by his loving family after a courageous battle with cancer. Richard was born in Philadelphia, February 26, 1930 to the late Charles and Magdalena... View Obituary & Service Information

The family of Richard L Calimer Sr. created this Life Tributes page to make it easy to share your memories.

Send flowers to the Calimer family.