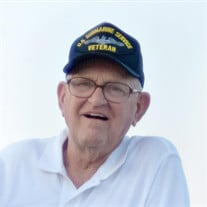 Richard C. Ailes of Dedham, MA, passed away peacefully on Saturday, July 28, 2018. Born October 16, 1924 and raised in York, Pa. to his parents, the late Ethel (Hildebrand) and Albert C. Ailes. He graduated from William Penn Senior High School in 1943, earning several varsity letters from the swim team during his four years. Richard was a WWII Veteran of the United States Navy Submarine Service. He enlisted in United States Navy in February 1942 and was inducted into active service February 26, 1943. The U.S.S. Narwhal, U.S.S. Sablefish, and the U.S.S. Halfbeak were the three subs that he served on while in active duty in the Pacific. Richard met his wife Margaret, (Peggy) at the Philadelphia Navy yard. They married in April of 1948 lived in Upper Darby, Pa. and later moved to Boothwyn Pa. He worked for the Standard Oil company in Philadelphia, for many years working his way up to superintendent. Later in 1968, he moved the family to Pomona NJ, where Richard would own and operate his own fuel oil company, first Ailes Petroleum in Atlantic City and then later Offshore Petroleum in Galloway. Richard retired at the age of 65. He wore many hats during his life: enlisted man, husband, father, coach, volunteer fireman, umpire and a eucharistic minister. Richard loved watching sports, eating sweets, reading the paper, attending dances and church events with his wife, Peggy and loved celebrations with his family. He also enjoyed country music, going to the gym, being a member of the Knights of Columbus, driving his truck, being on the open road and golfing. He never seemed to miss his children’s athletic or social events. He instilled in his children a strong work ethic and he believed that one should “never give up”. “Don’t worry be happy” was a favorite quote. He moved to MA in 2015 to live with his daughter, Mary Anne, where he spent his last years of his life doing what he loved; being as independent as he could be. “You may not control life’s circumstances but getting to be the author of your life means getting to control what you do with them”. -Atul Gawande. He will take his final ride in Massachusetts, Wednesday, August 1, 2018. We will travel on 135 into Needham then past the Veteran’s administration where Richard often went for his routine care. He was always welcomed there and treated with highest respect and frequently “thanked for his service”. He is predeceased by his loving wife, Margaret Ailes (Chambers) also loving called, Peggy or Babs; infant daughter, Margaret Mary Ailes; his son, Kevin; his brother, Charles; and his sister’s husband, Charles. Richard is survived by his children, Richard (Shirley Dodson), David (Patty), Mary Anne Bell (Mitchell), and Joseph (Kim); his daughter in law, Sue Ailes; his grandchildren, Caroline and Leah Bell, Drew, Mack, Jeilyn, Greg, Sam, Charlene ( Jeremy Dayton) Rebecca (James White), Josh Ailes (Amy Newman), Katherine Ailes and Meredith Godfrey; his great grandchildren, Harrison, Maura, Jacob, Grace, and Benjamin White and Adrian Michael Ailes; his sister, Mary Terwilliger; his nieces, Lea Grubbs (Gene), Eunice Fitzkee, and Kathy Davies (Jim); and his nephews, Bobby Holdsworth (Lorraine) and Charles Ailes (Carmen). A visitation will be held on Saturday, August 4th from 10:00 to 11:00 AM with a Mass of Christian Burial all taking place at Our Lady of Perpetual Help Parish, 146 S. Pitney Rd, Galloway. Interment will immediately follow at Atlantic County Veterans’ Cemetery, where he will be put to rest next to the love of his life, Margaret. Arrangements have been entrusted to Wimberg Funeral Home, 211 E. Great Creek Rd, Galloway 609-641-0001. For condolences, please visit wimbergfuneralhome.com.

The family of Richard C. Ailes created this Life Tributes page to make it easy to share your memories.

Send flowers to the Ailes family.