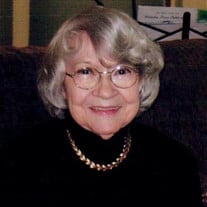 Rae Bertolet Ludwig, of Hammonton, passed away on July 17, 2019. She was born on September 17, 1917 in Norristown PA. She was raised in Blandon, PA and lived for most of her working life in Philadelphia, PA. She also lived in Cardiff, NJ, Brigantine, NJ and Somers Point, NJ. She was a resident at Heritage Assisted Living in Hammonton, NJ until her death just short of her 102nd birthday. She was a graduate of Fleetwood High School, Peirce Junior College and attended the University of Pennsylvania. Rae was a freelance writer who earned her living as a technical writer for the medical profession. She collaborated with prominent Philadelphia physicians, surgeons and research scientists, Jacob Gerson-Cohen being most noteworthy for his original contributions to medical research. She was a member of the American Medical Writer's Association. A fast learner, Rae published several articles in Scientific American as a ghost writer for more well-known researchers. She also was the author of numerous short stories, poems and articles of general interest. She received first-prize awards for many of them. Several had appeared in The Press of Atlantic City. In her spare time, she had volunteered for several organizations including the local hospital and alcoholics anonymous; did children's knitting for a wide clientele; augmented her life-ling love of literature by attending great book studies at the local state college; and read 5-8 books per week. Rae was an accomplished player of the piano and organ. Never having a lesson, without reading music, she entertained family and friends with only the aid of a musical ear. She loved animals, especially wild birds and Sammy, her Siamese cat. Rae was widowed several times and was predeceased by her brother, Henny who was killed in the Second World War; her sister, Ella; and her nephew, Jerry. She is survived by a nephew, Irving from Hammonton, NJ. Anyone wishing to remember Rae with a contribution should send a donation to the Sunshine Foundation for Terminally Ill Children in Southampton, PA. Arrangements are entrusted to the Wimberg Funeral Home, 609-965-0357. Condolences may be left at wimbergfuneralhome.com. LEGACY AND THOUGHTS FOR THOSE WHO LOVED ME: I lived my life based on the credo articulated by Stephen Grellet: "I shall pass through this world but once. Any good, therefore, that I can do, or any kindness I can show to any human being, 1et me do it now. Let me not defer it or neglect it, for I shal1 not pass this way again." Those who Love me can honor me best by loving one another, bearing with each other’s faults, healing each other’s wounds, and treating everyone (regardless of color or creed) with kindness and forbearing. Be especially good to the wild birds, who gave me infinite pleasure after my true “family” had died, and to all cats, who reminded me always of my cherished, departed Siamese feline companion, Sammy. If anyone feels he/she hurt me in any way, be assured it, was forgiven long ago. If I, in turn, hurt anyone, I ask their forgiveness. I am a nonbeliever in standard religion and the “Resurrection,” so I must assert myself while I’m stilI able, here on earth! Love to everyone.

Rae Bertolet Ludwig, of Hammonton, passed away on July 17, 2019. She was born on September 17, 1917 in Norristown PA. She was raised in Blandon, PA and lived for most of her working life in Philadelphia, PA. She also lived in Cardiff, NJ, Brigantine,... View Obituary & Service Information

The family of Rae Bertolet Ludwig created this Life Tributes page to make it easy to share your memories.

Send flowers to the Ludwig family.