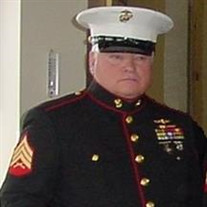 Philip James Uecker, Age 72, left us suddenly on Sunday, August 26, 2018. Phil was born in Phila., PA to James Uecker and Eileen Windholtz. His father was in the Navy, so he had many places they had called home before settling in Atlantic County. Phil was a life-long resident of Galloway Twp. Phil was a loving husband, father and adoring grandfather. His 2nd family was his community which he dedicated his life to serving and loved as well as he had his country as a United States Marine. Phil served the United States Marine Corp. from 1965-1971 as a Sgt. in the 1st Recon Unit in Vietnam for one tour. He was a proud member of the Cape Atlantic Detachment of the USMC League and had served as State Commandant of N.J. for 2 years, as well as a Pack Leader for the Military Order of the Devil Dogs. He also served as a police officer for Galloway Twp. Police Dept. from 1972-1997. Phil was a Past Chief, Past President and life member of Bayview Volunteer Fire Company in Galloway since 1982. Phil also was a Security Specialist for Homeland Security, as well as, serving to assist Congressman Frank Lobiondo as the Veterans Liason. Phil dedicated his entire life to: mentoring, volunteering, teaching and being involved in many groups, foundations and organizations. He was a kind and gentle man who upheld the oaths he had taken...and lived by them. His philanthropy of his time and effort that was felt by so many will never be forgotten. He is survived by his loving wife of 46 years, Kathleen; daughter, Danielle; granddaughters, Annaleisse Lowe and Alexandra Dickerson; son, Richard; brother, Rick (Donna); sisters, Rhonda and Paula; and his brother-in-law, Danny (Sue); and eleven nieces, three nephews, many cousins and friends. A visitation will be held on Friday, August 31st from 4:00 to 8:00 PM and again on Saturday, September 1st from 9:00 to 10:00 AM with a service starting at 10:00 AM all at Wimberg Funeral Home, 211 E. Great Creek Road, Galloway 609-641-0001. Interment will immediately follow at the Atlantic County Veterans Cemetery. In lieu of flowers, please make a donation in Phil’s name to Toys for Tots www.toysfortots.org Expressions of love and sympathy may be placed online at: wimbergfuneralhome.com

Philip James Uecker, Age 72, left us suddenly on Sunday, August 26, 2018. Phil was born in Phila., PA to James Uecker and Eileen Windholtz. His father was in the Navy, so he had many places they had called home before settling in Atlantic County.... View Obituary & Service Information

The family of Philip James Uecker created this Life Tributes page to make it easy to share your memories.

Send flowers to the Uecker family.