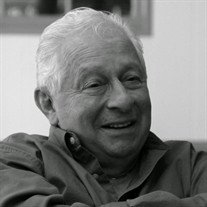 Paul J. Longo went to meet his Savior face to face on February 23, 2020. He was 79 years old. His family surrounded him at his passing. He fought a good fight, lived a great life but, in the end, went home to be with the Lord. He will be missed, but for a short while, until we are reunited with him. My flesh and my heart may fail, but God is the strength of my heart and my portion forever. Psalm 73:26 Born of Sicilian immigrants and raised in Atlantic City, he was always proud to be from Ducktown. He was predeceased by his parents Angelo and Mary (Augello) Longo and his sister Josephine Ana (JoAnn) Mathews. Paul attended A.C. schools and graduated from ACHS in 1958. He went on to attend Rutgers. Paul joined the Air National Guard and was heading to basic training on the day JFK was assassinated. He was activated for active duty by the U.S. Air Force in January of 1968, (Pueblo Crisis) and served his time until being honorably discharged in 1969. Paul started working as a boy carrying groceries and then selling newspapers on the beach at 10 cents each or 2 for a quarter. Paul was appointed Tax accessor of Atlantic City in the mid-’60s. Paul’s love was to sell commercial real estate. After leaving the tax accessor office, he worked at the New Jersey office of Albert M Greenfield, where he went on to become the president. In 1980 he started his own real estate business. He sold many Boardwalk properties during the heyday of NJ casinos. Paul loved being with family and friends, retelling the great stories from his childhood to his adulthood. He loved his friends and family. We will continue to tell his stories with joy, remembering the light in his eyes as he enjoyed retelling them with his friends and family. Paul served various capacities at the Atlantic City Rescue Mission, Betty Bacharach, Jaycees, Young Republicans, and UNICO. In 1980 he was a founding member of the Atlantic City Chapter of UNICO National. He served as their president and helped start the foundation. To this day, this chapter has awarded over $700 thousand in scholarships to local students. Paul is survived by his wife Naomi (Dodson). Lieutenant Dodson as she was known to him when they met, while a patient in the Myrtle Beach AFB. She is still in charge! He is further survived by his daughter Andrea Longo Wescoat, son Angelo Gaetano Longo and wife Cherie. And his grandchildren Luke, Gabriella, and Genevieve, who were all so special to him. The family would also like to thank the doctors, nurses, and staff of AtlanticCare Mainland; Acuity LTAC; Fox-Subacute; & Jefferson University Hospital for the caring and dedication shown by them during this trying time. Further, the Longo family would like to thank Pastor Pete Nelson, his wife Karen and Pastor Al Syvertson and his wife Evelyn and our entire Beacon Church family for the extraordinary lengths they went to care for our Paul and us. A Memorial on Sunday, March 1, 2020 will be held from 2-4:30 pm and service immediately following a Beacon Church, 420 South 6th Ave, Galloway, NJ 08205. In lieu of flowers, a donation to Beacon Church expansion for youth facilities or Atlantic County UNICO Scholarship Foundation, Inc. would be appreciated.

Paul J. Longo went to meet his Savior face to face on February 23, 2020. He was 79 years old. His family surrounded him at his passing. He fought a good fight, lived a great life but, in the end, went home to be with the Lord. He will be... View Obituary & Service Information

The family of Paul J Longo created this Life Tributes page to make it easy to share your memories.

Paul J. Longo went to meet his Savior face to face on February...

Send flowers to the Longo family.