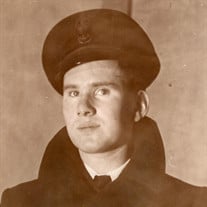 PATRICK JOHN MCNAMARA (92), passed away peacefully at home on August 4, 2018. Born in London, England on July 12, 1926, Pat grew up in the Forest Gate area of London, located in the East End. Pat’s parents emigrated from Ireland to the United Kingdom in the early 1920s. In his early youth, Pat served as an altar boy at St. Anthony’s Catholic Church located in Forest Gate, London. Pat was a talented artist and avid reader of books. Pat served as a Petty Officer in the Royal Navy during World War II. Prior to and after the war, Pat served with the Royal Merchant Navy which allowed him to travel around the globe. While visiting with his maternal aunt and uncle, Mr. & Mrs. Joseph Conway, of Brookhaven, PA, he met his wife to be, Frani to whom he was married for 54 years until her passing in March 2014. In the early years of their marriage, Pat served four years in the U.S. Army while stationed at Fort Story in Virginia Beach, VA. Pat and his family moved to New Jersey in the early 1970s, where he worked for the Atlantic City Electric Company as a truck driver responsible for the hauling of heavy equipment until he retired at the age of 71. Pat is predeceased by his wife, Frances Lea McNamara (nee Robinson); his parents, Patrick John McNamara and Elizabeth Regina McNamara (nee Daly) of Raleigh, Essex, England; his brothers, Michael (Vera) and John; and his sisters, Sheila and Mary (Ron). Pat is survived by his sons, Patrick John McNamara, Jr. and John Fitzgerald McNamara of Galloway Township, NJ; and daughter, Kathryn McNamara Brehm (Bill) of Ocean City, NJ. He is also survived by his sister, Pauline Rosemarie Volz (Robert) of West Chester, PA; his sister-in-law, Sally McNamara of Raleigh, Essex, England; his grandson, Joshua Al McNamara of Stoneboro, PA; along with numerous nieces and nephews. Visitation will be held in Pat’s honor on Saturday, August 11, 2018 from 9:00 a.m. to 10:30 a.m. with a memorial service to follow at 10:30 a.m. at Wimberg Funeral Home, 211 E. Great Creek Rd., Galloway Twp. 609-641-0001. For condolences and/or directions, please visit www.wimbergfuneralhome.com.

PATRICK JOHN MCNAMARA (92), passed away peacefully at home on August 4, 2018. Born in London, England on July 12, 1926, Pat grew up in the Forest Gate area of London, located in the East End. Pat&#8217;s parents emigrated from Ireland to the... View Obituary & Service Information

The family of Patrick John McNamara created this Life Tributes page to make it easy to share your memories.

PATRICK JOHN MCNAMARA (92), passed away peacefully at home on...

Send flowers to the McNamara family.