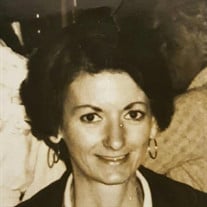 Koch, Patricia Ann (Wallace/Scarlett), 71, peacefully passed away September 8, 2016 with her family by her side. Pat was born July 18, 1945 to Earl and Marguerite Scarlett of Egg Harbor Township, where she was raised with her five brothers and lived most of her life. Pat worked very hard at many local restaurants, including the memorable Zaberer's Restaurant, where she developed many long lasting friendships. She met her true love, Paul Koch, of Bryn Mawr, PA, in the early 70's and they were married until his passing in 2003. Pat retired from Resorts International's Buffet Room after waitressing there for 30 years, where she was affectionately known as "Patty Wawa". She was best known as the "life of the party" with her silly sense of humor and her feisty personality, always the joke and story teller, always the motivator to get the crowd up to dance. Over her years, she enjoyed bowling, traveling, playing at the casinos, clam bakes, barbecues, and sharing good times with family, friends, and her cats, Timmy and Buddy. Pat's life was one that was very well lived even while enduring thirty long years of medical complications brought on by meningioma brain tumors. Pat was predeceased by her parents, her brothers, Mickey, George, and Bobby; and her husband, Paul. She is survived by her daughters, Brenda Wallace and Robin Wallace; her grandchildren, Roy Corby (Tiffany), Jacquelyn Reilly, and Shannen Wallace; her great-grandchildren, Emma and Roy Corby; her brother and sister-in-law, Jack and Sue Scarlett; her brother, Kenny Scarlett; her loyal friend, Gerda Smolka, her in-laws, the Koch family, her dear cousins, her devoted niece, Sharon DiLorenzo; many nieces and nephews, and her friends at her final home of Royal Suites. A sincere and special thank you to the caring staff at Royal Suites and Compassionate Care Hospice, especially, Sancia, Cecilia, Suzanne, and Shana. A special thanks to her Holy Trinity family and friends. Services will be held Wednesday, September 14, 2016 at 12:00 PM at Wimberg Funeral Home, 211 E. Great Creek Rd. Galloway, NJ (609)641-0001. Burial will follow at Atlantic County Veteran's Cemetery in Estell Manor, NJ. In lieu of flowers, donations are welcomed to the charity of your choice. For condolences or directions, please visit wimbergfuneralhome.com.

Koch, Patricia Ann (Wallace/Scarlett), 71, peacefully passed away September 8, 2016 with her family by her side. Pat was born July 18, 1945 to Earl and Marguerite Scarlett of Egg Harbor Township, where she was raised with her five brothers and... View Obituary & Service Information

The family of Patricia A Koch created this Life Tributes page to make it easy to share your memories.

Send flowers to the Koch family.