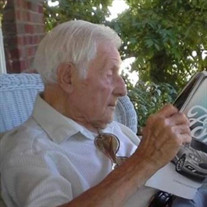 Palmy S. Matragrano, 98, of Ocean City, passed away on Wednesday, April 22, 2020. He previously resided in West Caldwell, NJ for 63 years. Palmy was born September 2, 1921, to the late John and Genevieve (Vocaturo) Matragrano on Yonkers, NY, the oldest of two sons. Palmy served in the US Army during WWII and served in England. There he met his wife of 57 years, Joan Clarke and they married in England. Palmy worked for the local government in West Caldwell and also was a volunteer fireman. Palmy was a member of Old Guard and organized their bus trips to AC for 26 years. After retirement, he and his wife travelled to England every year to spend time with family. At home he enjoyed golf and gardening. Palmy was preceded in death by his wife, Joan; his daughter Judith Ann; and his parents. Palmy is survived by his brother, Eugene; his daughter, Jane; his grandchildren, Jennifer (Kent), Pamela (Kevin), Deborah (Jay), and Wesley (Kelly); and six great grandchildren. Services will be private. In lieu of flowers, memorials may be made to the American Legion Post 524, 4562 West Ave, Ocean City, NJ 08226 or the charity of your choice. Arrangements have been entrusted to Wimberg Funeral Home, 211 E. Great Creek Rd, Galloway 609-641-0001. For condolences, please visit wimbergfuneralhome.com.

The family of Palmy S Matragrano created this Life Tributes page to make it easy to share your memories.

Palmy S. Matragrano, 98, of Ocean City, passed away on Wednesday,...

Send flowers to the Matragrano family.