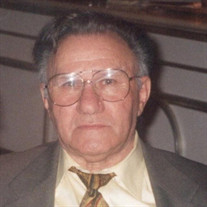 Ascanio “Oscar” Governale, beloved husband, father, grandfather, and great-grandfather passed away peacefully with his wife by his side on October 10th, 2021 at the age of 95. He is survived by his loving wife, Anita Marie (née Millaci); his children, Frank Governale, Benjamin Governale, Alisa Doyle (Scott Doyle, deceased 2002), and Lynann Governale (Irina Mushiyeva); his grandchildren Christina Sica (Angelo Sica), Renee Governale, Celeste Governale, Benjamin Governale Jr., Kaitlyn Doyle, and honorarily Stephen Connor; and his great-grandchildren, Madison Sica, Mackenzie Sica, and Morgan Sica and numerous nieces, nephews, cousins and friends. Oscar was born in Brooklyn, New York on November 22, 1925, to Rose Gallo and Benjamino Governale. He was one of eleven children born to Rose and Benjamino. On October 1st,1955 Oscar married Anita and began the beautiful sixty-six-year-long marriage that brought them their four beloved children. Oscar served honorably as a member of the US Army in the Korean War, and throughout his life worked for Lummus Combustion Engineering, which afforded him and his family many opportunities for travel, further broadening his circle of family and friends. Upon retiring, he returned home to Brooklyn and worked for the Metropolitan Transportation Authority before officially retiring and moving to South Jersey. Oscar was an incredible cook and an avid gardener. Of his many loves, there was nothing in his life that he loved more than his family. He was a dedicated father and grandfather. Most of his free time was spent spoiling his family and friends. Whether he was tending his pool to host summer barbeques, preparing someone’s favorite home-cooked meal, or slipping a twenty into his grandchild’s pocket; everything he did served to make his loved ones’ lives a little brighter. He leaves behind a large extended family that will not soon forget his generosity, warm smile, and comforting presence. Viewings will be held on Thursday, October 14th from 5:00 pm - 8:00 pm and Friday, October 15th from 11:00 am - 12:00 pm at Wimberg Funeral Home. A funeral service will be held at 12:00 pm after Friday’s viewing at Wimberg Funeral Home. The burial service will follow at Holy Cross Cemetery in Mays Landing at approximately 1:30 pm. In lieu of flowers, the family asks that you make a donation in his name to a local children’s charity.

Ascanio &#8220;Oscar&#8221; Governale, beloved husband, father, grandfather, and great-grandfather passed away peacefully with his wife by his side on October 10th, 2021 at the age of 95. He is survived by his loving wife, Anita Marie (née... View Obituary & Service Information

The family of Oscar Governale created this Life Tributes page to make it easy to share your memories.

Send flowers to the Governale family.