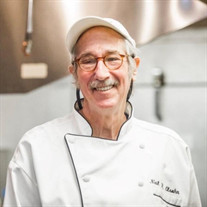 Neil Robert Elsohn, also known as Cheffy and Poppy, passed away peacefully at home on March 24, 2021. Neil lived his life in a bold, unapologetic and creative manner, endearing him to many, puzzling some, and always demanding the undivided attention of those in close attendance. He was best known for creating and heading the fine dining restaurant in Cape May, The Waters Edge from 1987-2005. He loved to tell the story of being the first chef in Cape May to bring cilantro to town. He was a consummate perfectionist with his culinary expertise and demanded the same of those working with him. He taught many aspiring cooks what it meant to be a chef, spawning restaurants of their own. The Waters Edge was critically acclaimed by The Atlantic City Press, The Philadelphia Inquirer, The New York Times, New Jersey Monthly Magazine and many other publications during its successful run. He was also the chef-owner of Gertrude's in Ventnor in 2008 and 2009. In addition, he commanded the kitchens of other local restaurants including Dakota Steak House in Vineland, Max's and Cubby's in Gloucester City, and The Cove in Brigantine. Before moving from North Jersey to Cape May, he led the Old Mill Inn in Basking Ridge and Joie de Vivre in Madison, NJ. He graduated from the New York Restaurant School in Manhattan with Honors in 1985. Prior to becoming a chef, Neil was the owner and director of The Yoga and Growth Center of Bergen County and taught yoga and meditation there from 1979-1983. In fact that was his standing when he met Karen Fullerton at the Riverside Square Mall in Hackensack in 1982. She was a manager at one of the American Woman Health Clubs and they found themselves in booths next to each other during a health and physical fitness fair. He was dressed in all white as a yogi should be and she was clad in all black leotards as an aerobics instructor. Sparks flew and they were married in 1985 on the shore of their lake house in Newton, NJ. Neil and Karen's long awaited children Lillian Rose and Earldean Robert arrived in 1992 and their family was complete. Many happy years ensued finding Earl pursuing surf photography, gem and mineral collecting and extensive travel throughout the United States. Neil and Earl shared an almost religious devotion to music and attended many concerts together until Earldean passed away suddenly at the young age of 24 on August 13, 2017. Lillian found fulfillment in the study of psychology and earned her Master's Degree in 2017 from Stockton College. She is employed as an LCSW at Jewish Family Service in Margate and is happily engaged to Daniel Whitcraft. Their upcoming wedding is scheduled for May 15, 2021 and will be held on St. John USVI, where the family vacationed many times over the years, enjoying the friendship of Scott Wilkie, Hilary Tittle and their daughter Siena. Neil reveled in the success of Scott and Hilary's own restaurant, Rhumblines originally in Cruz Bay, now found in Coral Bay. Neil was born April 16, 1953 at Brooklyn Jewish Hospital to Gertrude and Leon Elsohn. He spent his childhood in Great Neck NY and summers in Pine Plains, NY at his family's vacation home. He is survived by both of his sisters, Lynda Nan Indek of Bloomfield, NJ and Nina Rose Elsohn of Harrisburg, PA. Lynda and husband Bill gave Neil two beautiful nephews, Morgan Indek of Orlando FL and David Indek of Baltimore, MD and one beautiful neice, Rachel Indek, also of Baltimore, MD. Nina and husband James Lang gave Neil another beautiful niece, Anna Tova Levin of Harrisburg. Morgan is dad to Alivia and Sam while Anna and husband Ken are parenting Julia, Emma and Noah. Beloved Cousins are in abundance surviving on Neil's mom's side and can attest to Neil's feisty, cantankerous and generous personality. His spirit will live long in those he loved, worked and played with, from high school friends still in frequent contact to college buddies sharing regular lunches and dinners together to the many cherished cooks, bartenders, waiters, waitresses, bus people, dishwashers and customers from the years at The Waters Edge. Once you met Neil, you had to stay tuned for the show. Services will be held on Sunday, March 28th at 11:00 am at Wimberg Funeral Home, 211 E Great Greek Rd. Galloway 609-641-0001. Interment will follow at Lower Bank Cemetery. We will be live streaming the service on Sunday, March 28th. Please click on the link starting at 10:45 AM; https://webcast.funeralvue.com/events/viewer/50984 Of course, Neil demanded a party. Celebration of his life will be held at The Pitney Pub in Galloway after burial. In lieu of flowers, please send donations to Holy Redeemer Hospice. For condolences or directions, please visit wimbergfuneralhome.com.

Neil Robert Elsohn, also known as Cheffy and Poppy, passed away peacefully at home on March 24, 2021. Neil lived his life in a bold, unapologetic and creative manner, endearing him to many, puzzling some, and always demanding the undivided attention... View Obituary & Service Information

The family of Neil Robert Elsohn created this Life Tributes page to make it easy to share your memories.

Send flowers to the Elsohn family.