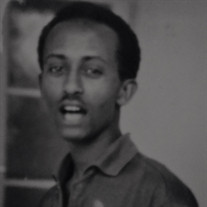 Negash Tekeste was born in the town of Chancho, in Shewa currently part of the Amhara region of Ethiopia, to his father Tekeste Gebreyes and his mother Asamenech Banjaw on September 6, 1941, Puagme 1 in the Ethiopian calendar. He was raised in the Kebena region of Addis Ababa and grew up within the Orthodox faith. He started formal education at the age of 8 at the Teferi Mekonnen School in Addis Ababa which he attended though his high school education. In 1964 he graduated from Haile Selassie I University with a degree in Mechanical Engineering and began his professional career at the Addis Ababa Cement Factory as a Plant Manager where he maintained the operation of the facility. In 1975 he transferred to the National Metal Works Corporation as a Plant Manager as a Plant Manager and head Engineer. In 1979 he transferred to the Ethiopian Building Materials Corporation as Head of Engineering to manage the full department. In 1983 he transferred to Industrial Projects Services as a Lead Engineer to expand the operations of the facility in projects throughout the country. In 1992 he worked for the UNECA to assess project developments in Madagascar, Kenya and Zambia. But above all else his greatest achievement was the care of his children, Hellina Tekeste, Fitsum Negash and Tekeste Negash, and in 1996 he moved to the United States to provide a better life for them leaving the rich life he had in Ethiopia. He educated, counseled, and fostering the well-being of his children like he had helped numerous others throughout his life. He witnessed the graduation of all three of his kids from high school and subsequently their college graduation in pride. He witnessed the birth of his granddaughter Ruthie Alemayehu. He was a loving and caring father who was rich in spirit and deep in his soul. And on January 11, 2019 he passed away at the AtlantiCare Medical Center, City division in the arms of his three children. A celebration of life will be held on Saturday, January 19th from 10:00 until 1:00 PM at Wimberg Funeral Home in Galloway, NJ. Interment will immediately follow at Germania Cemetery on Moss Mill Road in Galloway.

Negash Tekeste was born in the town of Chancho, in Shewa currently part of the Amhara region of Ethiopia, to his father Tekeste Gebreyes and his mother Asamenech Banjaw on September 6, 1941, Puagme 1 in the Ethiopian calendar. He was raised... View Obituary & Service Information

The family of Negash Tekeste created this Life Tributes page to make it easy to share your memories.

Negash Tekeste was born in the town of Chancho, in Shewa currently...

Send flowers to the Tekeste family.