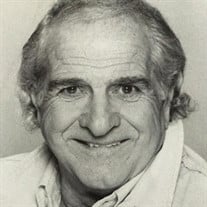 Ned Martin Surkin, 90, of Egg Harbor City, NJ passed away of natural causes at ACMC Mainland Division on August 25, 2017. Ned was an entertainer, drummer, actor, and created the "American Hawaiian Revue" which performed for numerous years at the Tiki Terrace in Atlantic City and the Waikiki Motel in Wildwood Crest, along with various other venues in the area. In addition, Ned performed as a drummer with a multitude of jazz, Dixieland, and country bands in the greater South Jersey/Philadelphia area. His passion was playing the drums and performing in front of an audience on the stage. In his later years, he transformed from performing in front of live audiences to performance in small roles in movies and TV. Most notably in the hit movies "Philadelphia", "12 Monkeys", and "The Sixth Sense", and on the TV series "Hack". Ned served in the United States Navy during World War 2 aboard the USS Bebus DE10 in the South Pacific Theater. While living in Edgewater Park, NJ, Ned was a sergeant in the local police department, graduating from the 1st class of the Burlington County Police Academy. Ned was happily married for 64 years to his loving wife Anna, the one true love of his life! He is predeceased by his father and mother, Harry and Blanche (Davis) Surkin. He is survived by his wife Anna (DiNoia), brother Alvin and his wife Kitty Surkin, three children: Larry (Janelle), Denise (Keith), and Hershey (Mary), eight grandchildren: Christina, Tony, Victoria, Pamela, Nicholas, Jessica, Brynda, and Katherine and eight great grandchildren. Graveside services will be on Monday August 28th at 1pm at the Atlantic County Veteran's Cemetery in Estelle Manor, NJ. For directions or condolences, please visit wimbergfuneralhome.com. In lieu of flowers, donations may be made to the Mullica Township Police Department National Night Out at 4528 White Horse Pike Elwood, NJ 08037

The family of Ned Martin Surkin created this Life Tributes page to make it easy to share your memories.

Send flowers to the Surkin family.